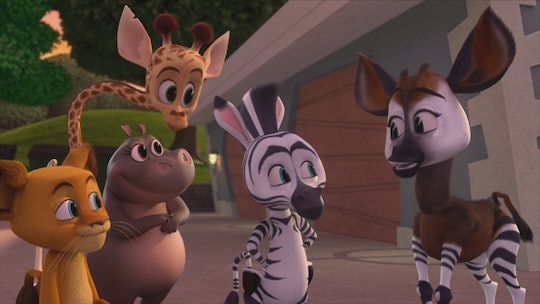 In honor of Pride Month, Madagascar: A Little Wild is celebrating with a pride-themed episode and new song.

Before Alex the Lion, Marty the Zebra, Melman the Giraffe, and Gloria the Hippo were the off-beat, grown-up animals we see in the Madagascar film franchise, they were adorable babies living in the Central Park Zoo. Madagascar: A Little Wild follows their pint-sized adventures and an all new season is premiering on May 27. And in honor of Pride Month, the show’s third season will kick off with a Pride-themed episode and a brand new original song you can listen to right now.

“Be Proud” is sung by a new character, Odee Elliot the Okapi, who is voiced by actor Ezra Menas. Menas, who made their Broadway debut in Jagged Little Pill in 2019, said in a statement that the song and episode make them cry. “If I would have seen this when I was a kid, I don't even know what I would've done,” Menas said. “This kind of acceptance and love and celebration, I think, is the biggest takeaway from this episode. It's just a beautiful thing.”

The song appears in the episode titled “Whatever Floats Your Float,” written by Laura Zak. In the episode, the habitat is getting ready for its annual Animal Pride Parade. But when Marty meets the habitat's newest resident Odee, Marty can't decide what float Odee should join. They kind of look like a zebra... but also maybe a giraffe? Marty makes it his mission to figure out what kind of animal Odee is... and misses out on all the fun of the Animal Pride festivities in the process.

DreamWorks Animation, which produces Madagascar: A Little Wild, has been working with GLAAD to create more inclusive programming to ensure that all families are represented on-screen. Jeremy Blacklow, GLAAD’s Director of Entertainment Media, praised DreamWorks writers for creating a “beautiful” episode. “We can't wait for kids and parents around the world to fall in love with Odee, the same way that we have!" he said in a press release.

The episode is a sweet message of acceptance that shows kids (and parents) that there’s room for all of us in the parade, a message encapsulated in the lively (and catchy) “Be Proud.” And from what we can tell so far? It’s a bop. Check out this preview below...

Season 3 of Madagascar: A Little Wild will premiere on Hulu and Peacock on May 27. A full version of the song will be available to download on Spotify and Apple Music the next day on May 28.