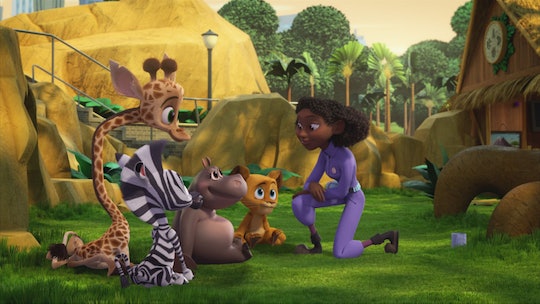 Do you know what's better than animated talking zoo animals? Animated baby zoo animals who can talk, sing, and make you laugh, which is why the new Madagascar: A Little Wild series from DreamWorks is definitely going to be a family favorite. After all, baby versions of animals are always the most compelling, especially if they know how to carry a tune.

Starting on Sept. 7, parents and kids will be able to tune in to Hulu and Peacock to see Gloria the Hippo, Alex the Lion, Marty the Zebra, and Melman the Giraffe as they've never seen them before. Little kids in the zoo. Anyone who has followed the massively popular Madagascar franchise from DreamWorks knows this group of animal pals have great chemistry together. And now we're going to see the origin story of that chemistry.

"They might be small, but like everybody who lands in New York City, these little guys have big dreams and Madagascar: A Little Wild will follow all of their adventures," DreamWorks said in a recent press release.

In this new series, Alex, Gloria, Marty, and Melman learn how to navigate their lives in the Central Park Zoo as young animals with big plans and big dreams to go on some big adventures. Not to mention, lots of music, which is an integral element for any kids' show to keep little ones engaged.

The series is executive-produced by Johanna Stein and features the voice talents of Tucker Chandler as Alex, Amir O'Neil as Marty, Shaylin Becton as Gloria, and Luke Lowe as Melman. Capturing such iconic characters is not easy, but the trailer for Madagascar: A Little Wild definitely gives a sense that this new cast pulls it off.

The trailer sees the young stars of the zoo engaging happily with visitors from their rescue habitats during the day, all while Alex the Lion tries to convince his pals to hit the town for adventures at night. Clearly he came by his adventurous spirit at a young age. As for Melman, the Giraffe famous for being phobic about germs, he displays shades of his adult self in the trailer as well when he won't touch his friends until he knows they've washed their hands.

Madagascar: A Little Wild will be available to stream on Hulu and Peacock on Sept. 7.