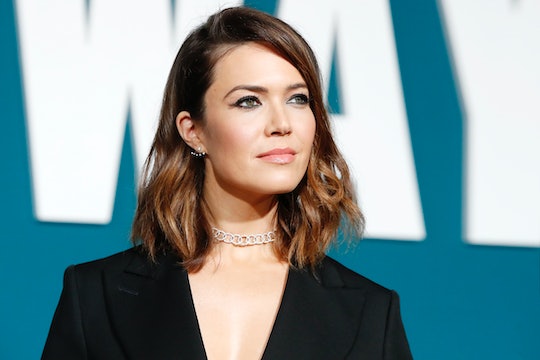 The This Is Us star likened the initial nipple soreness that comes with nursing to the calluses learning to play guitar causes.

In one of her first interviews since giving birth to a son in February, Mandy Moore compared breastfeeding to learning to play guitar. The This Is Us star shared a breastfeeding update with Dr. Elliot Berlin, host of Informed Pregnancy Podcast, and likened the initial nipple soreness that can come along with nursing to the calluses one develops on their fingertips when learning to play guitar.

"I had the newbie nipple soreness and had to build up my tolerance and threshold for [it],” Moore told Berlin. “I sort of liken it to playing guitar where you get your calluses on your fingers. You know what I mean? You get calluses on your nipples and then it doesn't hurt as much.”

Moore went on to explain that her newborn son, whom she and husband Taylor Goldsmith named August “Gus” Harrison, was quick to latch and has remained a good eater. “He latched immediately. I haven't had any issues with supply. He is a very hungry, well-fed dude," she said. “He's a great feeder, he's a great sleeper. And that really hasn't been an issue thus far, so I'm grateful of that."

Although Moore was ultimately forced to change her birth plan — swapping arrangements for a home birth for one in a hospital setting — due to a low platelet count, she told Berlin she remained in awe of what birthing people are capable of after having given birth herself.

“Any birthing person, my hat’s off to them. It is so powerful what our bodies are capable of, what we are capable of enduring,” she said. “No matter what your birth looks like, no matter what your story is, it is so truly badass what we can do — that we grow these babies, that we birth them and then we feed them afterward. It blows my mind every day to think back to it and just this experience now postpartum that I’m living, it boggles my mind.”

And while Moore has described Gus’ birth as “harrowing,” she’s also said during the interview she weirdly wished she could do it again. “I just remember sitting there [immediately after giving birth] going like, ‘I can’t wait to do this again,’” Moore said. “I’ve said to my husband so many times, and really to anyone that has come by that will listen, I can’t wait to do it again. As harrowing as the journey was, I miss it. I’m sad that don’t get to re-live it or do it again.”