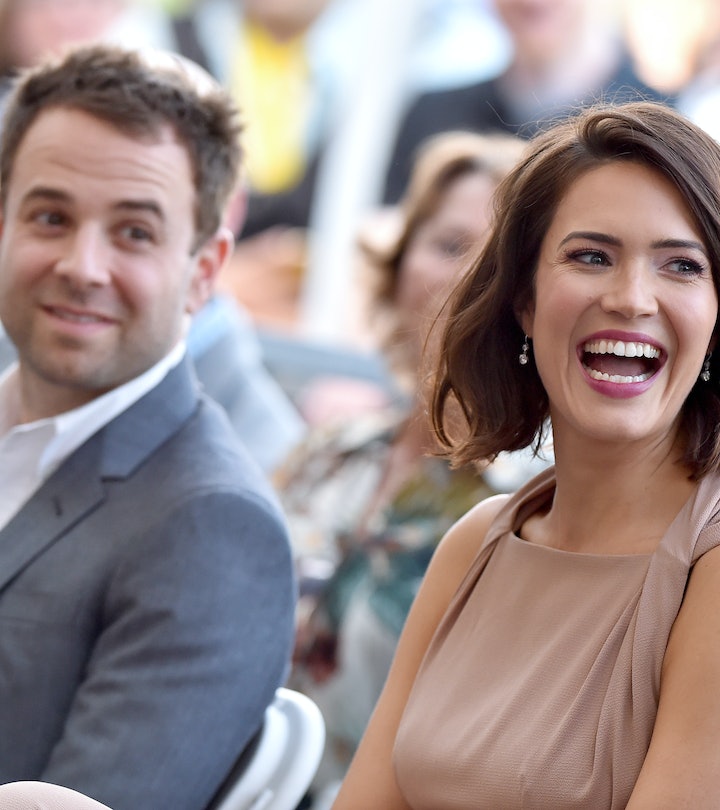 Mandy Moore is officially a mom! In an Instagram post shared Tuesday, Moore revealed she'd given birth to her first child with husband Taylor Goldsmith. The 36-year-old This Is Us star said she and Goldsmith were already head over heels in love with their sweet baby boy and shared his adorable name.

"Gus is here," Moore wrote on Instagram when sharing a photograph of her newborn son in a baby blue onesie. "Our sweet boy, August Harrison Goldsmith."

Moore went on to reveal that baby Gus had been "punctual," arriving exactly on his due date "much to the delight of his parents," who had, understandably, been eagerly anticipating his arrival. "We were prepared to fall in love in all sorts of brand new ways, but it goes beyond anything we could have ever imagined," she added.

News of Gus' arrival comes just one day after Moore revealed she'd been forced to change her initial plan to have a home birth due to a low platelet count. "My platelets have been dropping throughout pregnancy," Moore said Monday in an interview on the Informed Pregnancy Podcast. "It's something I never thought about until I got, I'd say early to midway through my third trimester. They sort of started dropping pretty precipitously and fell below the threshold that would make it possible for me to do a home birth. Unfortunately, my plans have had to change."

Despite the change of birth plans, Moore has embraced her new role of mother, telling Romper in a recent interview that she and Goldsmith talked a lot during her pregnancy about how they wanted to raise their son. "I want to raise an intelligent, feminist, loving, compassionate young man, who respects women, and who understands boundaries," Moore told Romper.

After years of trying, Moore first revealed she was pregnant in September by sharing a few black-and-white photographs of herself and Goldsmith tenderly touching her growing bump. And while many stars seek complete privacy during their pregnancy, Moore remained relatively open and candid about her experience. She's discussed suffering from severe morning sickness and weight loss early in her pregnancy and even took to Instagram at one point to ponder if she'd ever "enjoy coffee again."

"It's one of my major food aversions right now (and I know — probably for the best), but it makes me feel sad because I used to dream about coffee before bed," Moore once said in an Instagram Story. "Coffee’s not the only one. … I had the worst food aversions, I still can't think about some things or look at them in the fridge."

With Gus' arrival, however, Moore can happily get back to thinking, looking, and hopefully eating all of her favorite foods.