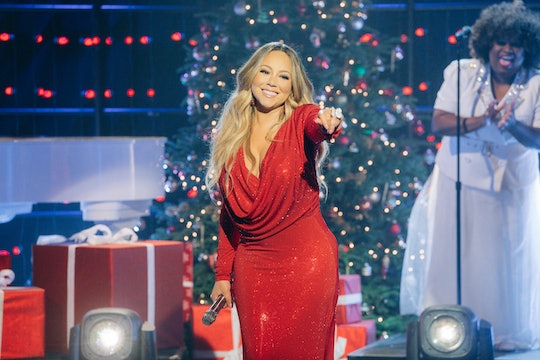 “Little Mariah represents my inner child believing in her own vision...”

Mariah Carey is now the author of her very first children’s book and it’s being released just in time for the holidays. The self-proclaimed Queen of Christmas released her highly-anticipated illstrated book, The Christmas Princess.

On Thursday, the “All I Want for Christmas” singer posted a video of her unboxing the books for the first time with her daughter, Monroe, who was very excited to show the fairies in the book, who resemble the 11-year-old.

Written by Carey herself, along with Michaela Angela Davis, and illustrations by Fuuji Takashi, the book tells a lighthearted holiday story about Little Mariah, who “doesn’t have much and doesn’t want a lot, but there is just one thing she longs for: a peaceful and joyous holiday season,” according to the book’s synopsis. “Feeling outcast and alone, Little Mariah sets off on a wintry, wondrous journey, ultimately discovering the healing power of her voice to spread the spirit of Christmas at home and all around the world.”

Carey made her first announcement about the holiday children’s book in an Instagram post back in January. “The Christmas Princess is a fairytale for holiday lovers of all ages,” she captioned the post. “Little Mariah represents my inner child believing in her own vision, she represents all children, especially those who feel like outsiders or ‘others,’ striving to believe in themselves. It was empowering to transform my childhood turmoil into a modern classic fairytale full of wonder and boundless hope.”

Over the years, the pop star legend has been candid about being ostracized as a biracial girl and bullied. In her book, she wanted the main character, Mariah, to work through that sadness through music, as the singer did. The beginning of the book features a note to her younger self: “No matter what things look like now, you are worthy and deserving of all the attention, love, protection, care, conditioner, and fancy dresses in the whole wide world.”

While many fans might not know much about her childhood, the inspiration behind Carey’s Little Mariah character in the book will come as a surprise to no one: her love of Christmas. “When I'm not on stage and I'm in holiday mode, there are rules that I set,” she told USA Today. “I don't care who it is – the kids, if I have guests, whatever – nobody is allowed to play or watch anything other than a Christmas-related thing. If I wake up in the middle of the night and walk into the living room, and the music isn't playing and the lights aren't on, I just can't handle it.”

Makes sense. After all, this is the woman who literally signals the beginning of the holiday season with her viral social media videos. On Tuesday, the day after Halloween, Carey rang in the holidays with a video of her shedding her witchy Halloween costume for a Santa-inspired jumpsuit and a title card that read, “It’s Time.”

The Christmas Princess is available on Amazon for $15.99 and on Carey’s store site for $18.99, including a matching t-shirt. You can also find the book at Target.

Aside from the book, the holiday queen is set to perform new Christmas concerts starting next month in Toronto and New York's Madison Square Garden.

“I'm trying to make these shows as magical as possible,” she told USA Today. “Oftentimes as a child, or even throughout earlier parts of my career, I did not feel loved. I certainly never felt unconditional love and that's what I have with my fans: that connection. So I'm extremely excited.”

More Like This
David Beckham Impressed Mariah Carey With His Rendition Of "All I Want For Christmas"
How Old Should Kids Be Before They Watch The 'Christmas Story' Sequel?
20 Of The Best Christmas Movies For Kids
Surprise Your Kids With This Exclusive Sneak Peek At Mickey Saves Christmas