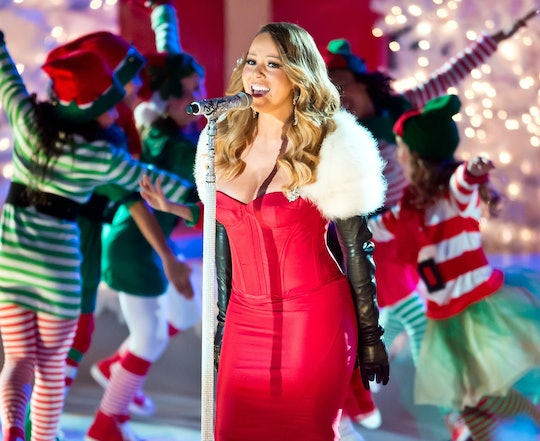 Even Mariah Carey’s dogs are in the Christmas spirit! On Monday, the Queen of Christmas shared the doggone, cutest Instagram reel on her page of her dogs singing along with her to hit hit holiday song, “All I Want For Christmas Is You.” Well, howling to it.

In the video, the 52-year-old pop star, dressed in a signature red holiday dress, walks over to the Christmas tree and belts out the lyrics, “all I want for Christmas is...” The camera darts over to twins, Moroccan and Monroe, and their two dogs, and then the family sings “youuuuuuu” and the dogs join them with nice and loud “awhoooo!”

The 1994 holiday anthem is currently number one on the Billboard Hot 100 List. The song is part of her first Christmas album titled Merry Christmas and includes classic yuletide hits such as “Joy To The World,” “Silent Night,” and “Santa Claus Is Comin’ To Town.”

Moroccan and Monroe commemorated the Billboard moment by giving their mother a congratulatory card that read in part, “congrats mom for the #1 billionth year. I love you mommy forevah...the best mom ever. Hot 100 #1.” Carey posted the card and billboard screenshot on her IG.

“The kids woke me up with the great news, I'm so thankful to everyone, especially my lambily 🐑🐑🐑,” she captioned the post. “I love you so much!!!”

The song also made the number one spot for its 25th anniversary in 2019 and the following year after and 2017.

Since its release, “All I Want For Christmas Is You” has evolved and created a generation of inspiration. In 2011, the song received a cover on Glee, as well as a rendition by Michael Bublé. That same year, Carey teamed up with Justin Bieber for a festive collaborative remix of the song.

Needless to say, the song will always be a classic. And if you can have your dogs wearing Christmas sweaters join you for the chorus? Well, you’re golden.