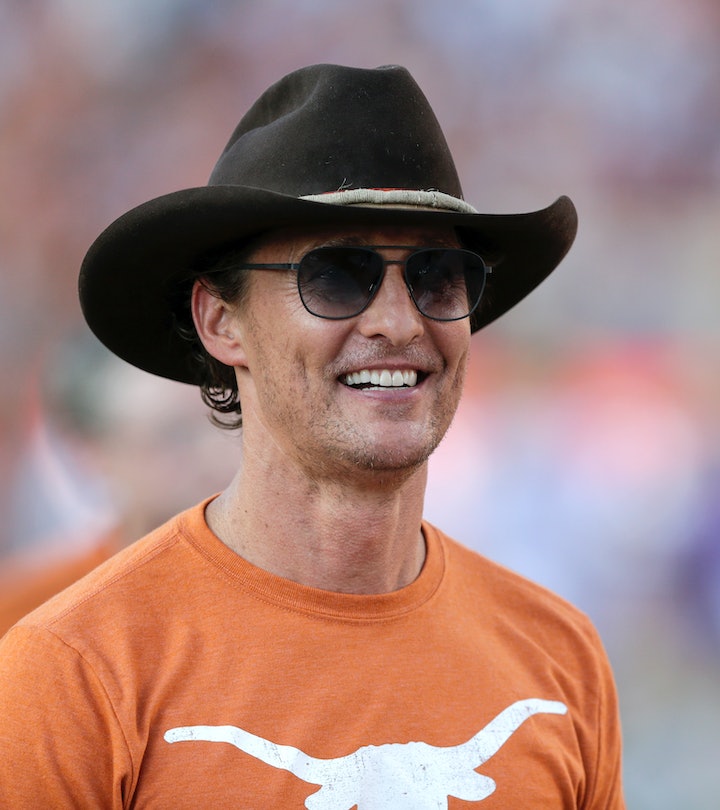 Turns out he was the runner up.

Moms: They're always looking to protect your feelings. It's a blessing and a curse. Especially when they keep up a running narrative for more than 40 years that is patently untrue. While sharing a childhood photo, Matthew McConaughey recalled winning the Little Mr. Texas contest more than four decades ago — except he didn't. Don't worry, though, hilarious story behind the photo serves as a testament to a mother's love. And a son's blind willingness to believe what she told him rather than maybe just give his trophy a light read.

On Monday, McConaughey shared a throwback photo of himself posing proudly as Little Mr. Texas in 1977. Or so it would seem. The black and white photo sees a young McConaughey in a white button down and a cowboy hat with a smirk of such confidence you can only assume that he took first place in the Little Mr. Texas contest he entered that year. He is holding a trophy after all. Except. On closer inspection, the trophy says "Little Mr. Texas. Runner-up 1977."

For more than four decades, the Oscar-winning actor has been strutting around thinking himself to be the one and only Little Mr. Texas. But, as he wrote on Twitter, "for 43 years I was Little Mr Texas...until i wasnt."

Please just look at that young boy's face and marvel at his confidence in his recent win. And know it was all a lie. From his own mom, no less.

Matthew McConaughey is not Little Mr. Texas despite reports to the contrary.

In October, McConaughey spoke to Kelly Clarkson on her talk show about his Little Mr. Texas experience as a young boy living in Bandera, Texas, and his mom's well-intentioned lie. It seems he learned that harsh truth in 2018 when he was going through some old photos. "I found that photograph. And I was like, 'Look at me, Little Mr. Texas.' And then something caught my eye. I looked on the nameplate that was engraved and I zoomed in on it and it said runner-up. So I question, I go, 'You know what, would I even be sitting here right now with the life I've had if I was raised thinking I was the runner-up?' So what did that white lie from my mom do for me, ya know?"

He went on to note that he initially had his suspicions, but his mom really doubled down on her lie. As he recalled to Clarkson, "When she first told me I go, 'But the other guy won,' and she goes, 'No, that family had a whole bunch of money. They were too rich, they were able to buy their kid a nice suit, we couldn't afford to so they cheated.'"

Matthew McConaughey's mom clearly wanted to give her son a good start, give him a little confidence. And what better way to do that than by telling him he is Little Mr. Texas? After all, he has gone on to become Big Mr. Texas.