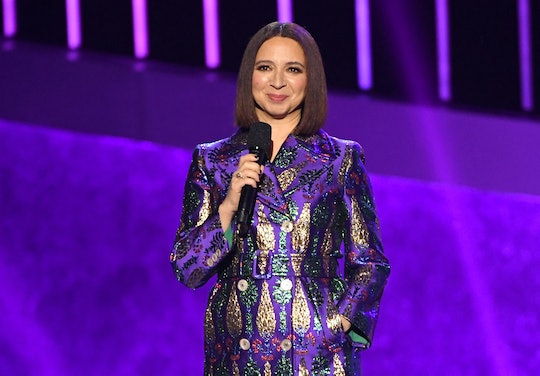 While Maya Rudolph is perhaps best known for her tenure on Saturday Night Live, she recently made history when she became the third Black woman to win back-to-back Emmys for her Big Mouth voice role and hosting SNL. “I feel like this Emmy is very fitting in that it’s for something that feels like such a personal achievement,” Rudolph said during her virtual acceptance speech about the historic win. Beyond her incredible fan base, the comedian and actress has loving and supportive family behind her.

Indeed, while the 49-year-old star has kept her personal life fairly private, Rudolph is a mother and has a loving, long-time partner.

Rudolph and her longtime partner, acclaimed director Paul Thoms ‘P.T.’ Anderson, are the parents of Pearl, 15, Minnie, 8, Jack, 10, and Lucille, 11. The kids gave their mother some major support while she was hosting SNL back in March.

“Some of you may know me because, well, I used to work here,” Rudolph shared in her opening SNL monologue, “and some of you may know me by the name Mommy because I gave birth to you... Just a heads-up to my kids, tonight Mommy's going to put on a lot of wigs and do a lot of weird voices. So it's just going to be like a typical day at home. I'll just be wearing a bra.”

Her Kids Love To Dance

Back in December, the SNL star talked about her kids’ love for music and called them “natural hams.”

“They’ll dance to anything,” she told PEOPLE and said their living room becomes a stage. “They’re natural hams.”

Her Husband Is A Director

According to his IMDb profile, Anderson is considered one of the first of the “‘video store’ generation of filmmakers.” His directorial profile includes Boogie Nights, Inherent Vice, and There Will Be Blood.

They’ve Been Together For Years

Although the two have been together for over a decade, Rudolph and Anderson are not married. In a 2018 feature with The New York Times, Rudolph confirmed that she and Anderson had been together for 17 years at that time. But despite not being legally married, the Luca actress, still calls Anderson her husband, according to Good Housekeeping. Rudolph said she felt felt “ooky” to call Anderson her boyfriend after the birth of their fourth child together, Pearl.

“People know what that means [husband],” she told The New York Times. “It means he’s the father of my child, and I live with him, and we are a couple, and we are not going anywhere.”

In other words, if it’s not broke don't fix it. As far as being a mother of four, Rudolph admitted that job was unexpected. “I never imagined I'd have four kids — that was never the goal,” she told Us Weekly in 2016. But it turned out to be her biggest blessing. “I feel really lucky that everyone is healthy and amazing,” she shared with Us Weekly. “It's endless stuff. It's endless entertainment, it's endless stress, endless responsibility.”