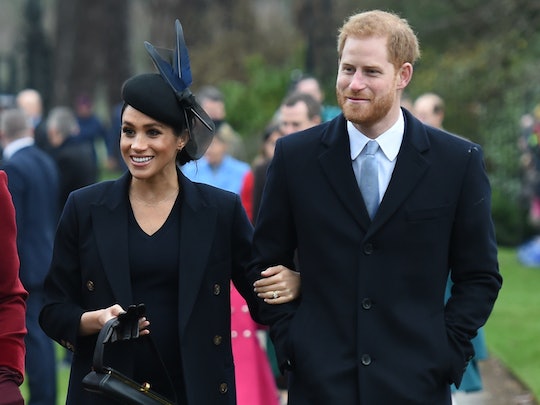 One little boy even thought Prince Harry was staff!

As they prepare to spend their first Christmas in their new home with their little boy Archie, Meghan Markle and Prince Harry went Christmas tree shopping earlier this week. And much in keeping with the royal couple's new scaled down, simpler style of living adopted since leaving the United Kingdom, the outing was as low key casual as they come.

The Duke and Duchess of Sussex were reportedly spotted shopping for a Christmas tree on Dec. 2 by an employee of the tree lot named James, who tweeted about the exciting moment. "Meghan and Prince Harry came into my work today and we sold them their Christmas Tree," the Twitter user claimed. The couple are reportedly planning to spend the holidays in their new home in Montecito, California with their 19-month-old son Archie, according to Harper's Bazaar, and the fact that they bought a Christmas tree appears to confirm that news.

The Twitter user went on to note in a separate tweet that the couple arrived to an empty lot because "their agent promoted them a good time to come instead of us shutting it down," which is so thoughtful when businesses are struggling. Asking them to shut down in order to buy one tree does feel a bit harsh.

Also, if the lot had been shut down the couple would not have been able to experience this sweet moment with a little boy. As the Twitter user wrote, "There was one family in there and their stoked little son ran through trees up to Harry and asked if he worked here not knowing who that is."

That's how casual this couple was when they were shopping. A little boy mistook a literal prince for a staff member. I don't know why but this makes me really happy for Prince Harry. Anonymity, at last.

This Christmas should be an exciting one for the couple, as they plan to decorate their home for the holidays. While there were initially reports that the Sussex family would head back to spend Christmas in the U.K. with the rest of the royal family, a source told Elle in November that their plans changed due to COVID-19 travel restrictions. While it would have been nice for little Archie to spend Christmas with his Cambridge cousins, Prince George, Princess Charlotte, and Prince Louis, 2020 is not really the year for that.

When it comes to the Sussexes, 2020 appears to be the year to find their own path. To step out of the spotlight, make their own home comfortable for themselves and little Archie. And to go shopping for a Christmas tree together, just like a regular couple.