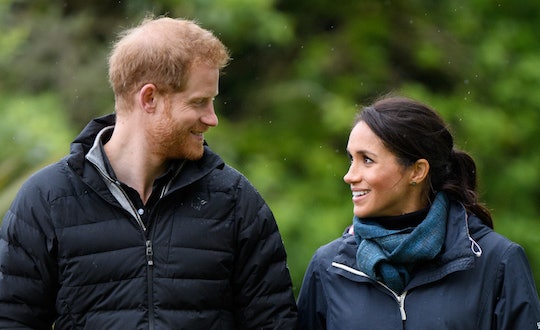 They hoped to recognize "all he stood for."

As former senior members of the royal family, the Duke and Duchess of Sussex are accustomed to throwing their weight behind charities they want to lift up with official appearances, letters, patronages. And now that they're living more private lives in California, they are finding their own way to make sure they are doing their part to help people, while also paying homage to the past. Meghan Markle and Prince Harry honored Martin Luther King Jr. by doing something he himself might have appreciated.

More Like This
Meghan Markle & Prince Harry Donated Cute Beanies For Archie’s 2nd Birthday
Prince Harry & Meghan Markle Once Met Up & Flirted At A Supermarket
“He Is Hysterical”: 12 Of Meghan & Harry’s Cutest Quotes About Archie
Meghan Markle Reportedly Doesn't Want "A Big Baby Shower" As Her Due Date Nears

Martin Luther King Jr. Day fell on Monday, Jan. 18, and the legendary civil rights activist was honored by millions of people around the country. People like President-elect Joe Biden, Vice President-elect Kamala Harris, and plenty of celebrities who took to their social media accounts to share quotes from Dr. King to commemorate all the good work he did in his life time.

As for the Duke and Duchess of Sussex, they no longer have personal social media accounts. Instead they decided to donate lunch through their Archewell Foundation to veterans volunteering for The Mission Continues in Los Angeles. The organization helps to empower veterans to continue using their skills to help communities thrive, and the couple wanted to show their gratitude. Not just for the veterans but also in the name of Martin Luther King Jr.

According to a tweet shared by The Mission Continues, Markle and Prince Harry sent a note that read, "In honor of this day of service, and in recognition of Dr. Martin Luther King Jr. and all that he stood for, we want to send our thanks and gratitude to the team at The Mission Continues. We're so proud of all the work you're doing to support your community and hope you enjoy this small token of our appreciation." They ended the note by saying they "hope to join you soon," signing off as "Harry and Meghan, the Duke and Duchess of Sussex."

The small token was a box of turkey sandwiches delivered by Home Girl Cafe and Catering to the Compton VFW, according to Newsweek.

Since their move to California, Markle and Prince Harry have been putting their energy into making a difference by speaking up about issues that matter most to them. As when Prince Harry wrote an essay for Fast Company in August about the ways social media divide people. And more recently through their Archewell Foundation when they both made ending hate speech and bigotry a priority, according to a report from People quoting a source inside Archewell, "Over the past few weeks, in particular, this issue has become even more vital and they have been working to encourage global CEOs to stand in solidarity with a coalition of civil and racial justice groups like the NAACP, Color of Change, and the Anti-Defamation League, which are calling for structural changes to our online world."

What better way to honor Martin Luther King Jr. than by continuing his mission to help others, end division and hate speech? Meghan Markle and Prince Harry are really putting their money where their mouths are.