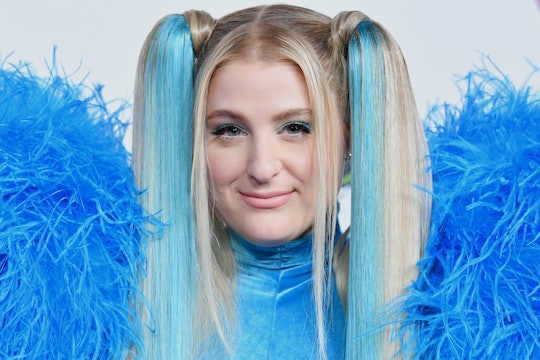 “I was like, ‘Can we please have two toilets next to each other?’”

Meghan Trainor is giving relationship experts a new question to ponder: Does the couple who pees together, stay together? In an interview on Nicole Byer’s Why Won’t You Date Me? podcast, Trainor revealed she and her husband, Spy Kids actor Daryl Sabara, had side-by-side toilets installed in their Southern California home and often go to the bathroom at the same time.

While installing adjacent toilets may seem like something only a couple crazy in love would do, Trainor, who welcomed a son with Sabara earlier this year, said the decision wasn’t born out of a romantic notion but was rather a simple act of problem-solving by two new parents.

“We just got a new house, and we did construction [on it,]” Trainor told Byer on Friday’s episode of Why Won’t You Date Me? “Nobody knows this, but in our bathroom, there was one toilet. And a lot of times in the middle of the night when we’re with the baby, we gotta pee at the same time. So I was like, ‘Can we please have two toilets next to each other?’”

Trainor went on to explain that although their contractor initially thought she was joking, he eventually got behind the odd request and installed a second toilet beside the bathroom’s original. Since then Trainor and Sabara have upped the level of intimacy in their relationship by using the toilets together. At the same time.

“We got two toilets sitting next to each other, and we’ve only pooped together twice,” Trainor told Byer. “We pee at the same time a lot.”

After getting hitched in 2018, Trainor and Sabara welcomed Riley, their first child together, in early February. “This sweet baby boy’s due date was today on Valentine’s Day,” Trainor wrote when announcing her son Riley’s birth on Instagram. “We got to meet him Monday, Feb. 8th! We are SO IN LOVE. Thank you @darylsabara for the best Valentine’s gift ever!”

While installing side-by-side toilets in your house may seem strange to most, Trainor described Sabara as a completely supportive partner who was willing to do whatever he could to make her life easier.

“The best part about my relationship is that Daryl — he cares so much about me, my well-being, my emotional state, my physical [health], everything,” she said. “And he just wants to do anything he can to make me better and make my life easier.”