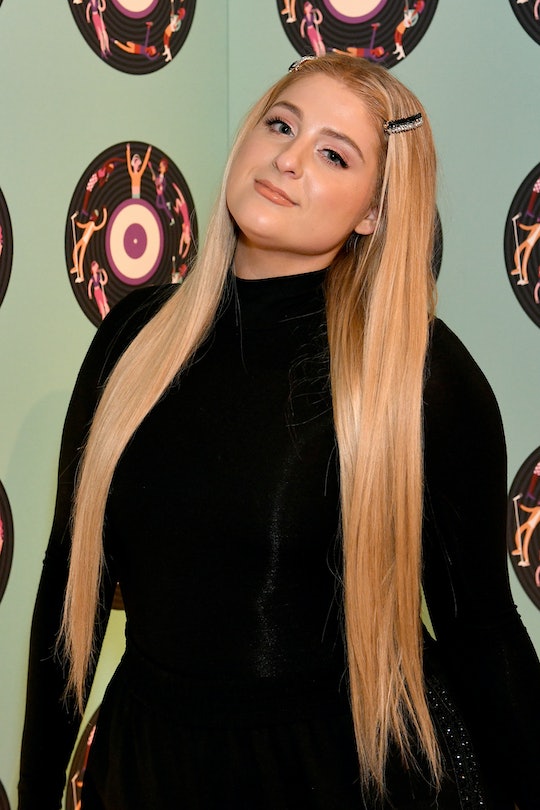 Meghan Trainor On Finding Joy In A Broken World

For most people, 2020 has been universally acknowledged as… difficult?... to put it mildly. But in spite of it all, Meghan Trainor is on cloud nine. You can hear it when you talk to her. The self-described homebody has been hunkering down with husband Daryl Sabara, four dogs, two brothers, and her parents. But the most exciting housemate will be the one she welcomes early next year: her long-anticipated first child, a baby boy. “It’s so good. I woke up to kicks,” she tells Romper. “It was amazing.”

Trainor had been expecting 2020 to be a big year. The singer-songwriter had a North American tour in the works with Maroon 5. But when COVID-19 derailed her plans, she decided it was the perfect time to make a Christmas album and a baby. “I have my studio [at home], so I was just like, ‘Okay, let's get into Christmas I guess,’” she says. “And I planned my pregnancy, so I was like, ‘Well, let's get this started.’ [I was] going online and figuring out how to do it,” she pauses. “Like [which] vitamins [to take], not how to actually do the science part … we got that one.”

While Trainor’s little one won’t be arriving until 2021, A Very Trainor Christmas drops on October 30. As the title suggests, it was a family affair. “[My family is] always on my albums, but this one was super special because they didn't really have a choice,” she jokes. “My brothers are so talented and I finally was like, ‘I need you to produce it, man, because I can't go anywhere.’”

Despite being immersed in making a Christmas album for the past three seasons, Trainor hasn’t gotten tired of the holiday yet. In fact she’s been leaning into it, and happily. “My house has been decorated already with the tree and everything since before October,” she says. “Halloween’s cancelled, so right on to Christmas.” She’s also partnered with Walmart to host the first ever "Top-Rated By Kids Toy Awards" on October 25 on FOX. The show, a star-studded family event that will feature comedy skits, musical acts (including Trainor’s debut of a song off her new album), and what sounds like a bunch of great toys of the holiday season. The show benefits the Salvation Army’s Angel Tree program, which provides new clothing and toys to more than one million children in need each year. “And DJ Khaled is my co-host!” Trainer laughs mischievously.

She may not have left home more than a few times since March, but Trainor has kept busy — which seems to be her default mode. While she came to fame in 2014 with the body positive anthem “All About That Bass,” at just 21 years old she already had a Nashville-based songwriting career and three self-produced albums behind her. In 2016, the artist best known for her vintage musical flavors bought a home in LA originally built for crooner Bing Crosby, and convinced several family members to head over from her native Nantucket, Massachusettes to join her. “I have a lot of family members that I forced to move out here,” she says slyly. She knows they’re going to make great babysitters.

Trainor sees the holidays — and the birth of her son — as the light at the end of the long dark tunnel that is this year.

Trainor’s pregnancy has been a source of joy during the pandemic, and she says she’s been happy to avoid morning sickness (something she was convinced she would suffer through). But common pregnancy symptoms can often overlap with illness, and it can be worrying. “Last night I had a headache all night and I kept having nightmares,” she says. “I'm like, "Oh, I have COVID, and here it comes."” (A temperature check soothed her nerves.)

She also has some of the worries any pregnant mom has. Figuring out which foods are safe to eat, navigating contradictory information (to work out or not to work out…?) and, of course, learning about all the things pregnancy can do to your body that you’d never even heard of, like diastasis recti. “Your abs split! ... It’s crazy!” But so far it’s been pretty smooth sailing. Her main issues right now are dry skin and resisting the urge to buy every adorable baby thing she sees. (She stays on task with a running list of baby items that she texts to her mom and husband.)

Trainor sees the holidays — and the birth of her son — as the light at the end of the long dark tunnel that is this year. She knows it won’t be exactly the same: she hasn’t been able to enjoy fall back home in Massachusetts, and she knows flying all her East-coast cousins out for the holidays won’t happen this year either. But this never ending holiday season and her growing family have been a nice escape and provided “pockets of joy” throughout the year, and she looks forward to sharing that with fans. “The world is broken right now,” she says, “but we're going to bring some joy back during Christmas time."

Walmart’s Top-Rated Toy Awards airs on October 25 at 4:30 p.m. EST/1:30 PT, on Fox. The show will also stream live on Walmart social channels including YouTube with co-hosts Collins Key, TikTok with co-hosts WeWearCute as well as Instagram and Facebook with co-host Laurie Hernandez.