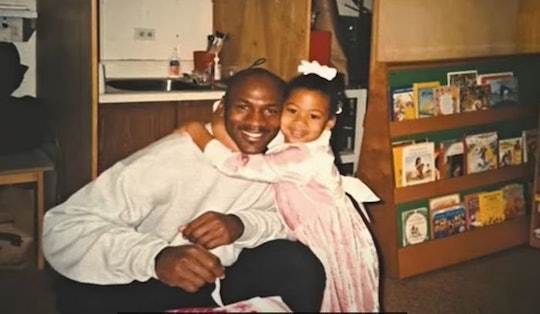 “My son definitely has my dad wrapped around his finger.”

The greatest NBA player of all time is a puddle of mush when it comes to his grandchildren. During an interview with sports media platform, TOGETHXR, Michael Jordan’s daughter, Jasmine Jordan-Christmas, jokingly talked about her father as a grandfather and how it’s made him a bit of a softie.

“Michael Jordan, the grandpa, is soft,” she shared in the Nov. 4 interview. “My son definitely has my dad wrapped around his finger. He loves being a grandfather, and my son is his first grandchild.”

The 28-year-old is the mother of 2-year-old Rakeem Michael Christmas Jr. and is engaged to former Indiana Pacers’ player, Rakeem Christmas. “That competition, and that, that drive is really going to be in my son's corner,” she added in the same interview. “And he's going to be able to experience that from a grandfather's lens. So the pressure won't be as hard on my son, but it'll definitely be there.”

Jasmine is the third oldest child of the NBA Hall of Famer, followed by her brothers, Marcus and Jeffrey, with his first wife, Juanita Jordan. She started working for Jordan in 2018 and currently heads her father’s brand as a sports marketing field representative. In fact, she is the company’s first and only female representative. “I think the stigma that is applied to children with successful parents is definitely one that is unavoidable,” Jordan-Christmas talked about creating her own identity from her famous legacy to TOGETHXR. “And at the end of the day, it's up to us to really pave our own way and pave our own path and understand that no matter what the expectation is, the pressure doesn't go away.”

In an interview with The Undefeated last year, Jordan-Christmas said that the Chicago Bulls legend was “as normal as he could be.”

“He was very involved during my childhood. He would pick me up from school, take me to my activities and be around as much as he could while still juggling practice and becoming the icon he became,” she told The Undefeated during a Q&A about her father’s hit Netflix documentary, The Last Dance. “But as I remember, he was there. He was as present as he could’ve been, and when he wasn’t I always felt his presence. He was very involved in my life and anything I had going on during those times. So I’m appreciative of the father he was then and how he is today.”