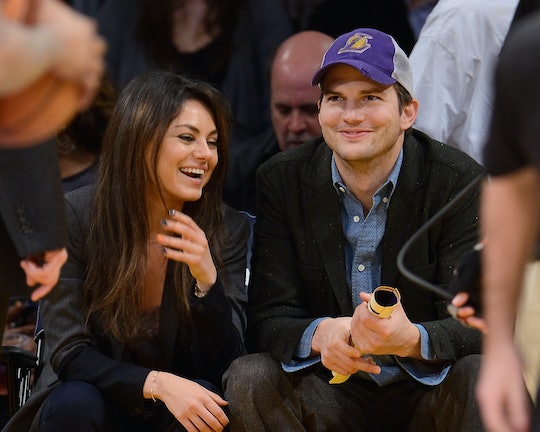 “You're putting water on the children? Are you trying to melt them?”

It was the sentence heard around the world, apparently. When Mila Kunis and Ashton Kutcher talked to Dax Shepard on his Armchair Expert podcast about their kids’ bathtime rituals, or lack thereof, there was a shocking amount of backlash. Well, all of those people who were just devastated about the lack of bathing going on in that household can rest easy. On Wednesday, Kutcher shared a video of Kunis bathing their kids and making a joke out of the whole bizarre situation.

Last month, Kutcher and Kunis admitted to Shepard that they weren’t fans of bathing their two kids, 6-year-old daughter Wyatt and 4-year-old son Dimitri, every day. “Here’s the thing,” Kutcher explained at the time, “if you can see the dirt on them, clean them. Otherwise, there’s no point.” Everyone had a good laugh, Kunis brought up the fact that she wasn’t someone who bathed her newborn babies a lot, and you would think they could just move on with their lives.

Nope. A big debate sparked from their comments, particularly among celebrities like Dwayne Johnson, Jake Gyllenhaal, Cardi B, and fellow parents Dax Shepard and Kristen Bell who all weighed in on the shower frequency question. Now the couple has responded with an Instagram video offering proof that they do, in fact, bathe their children.

Ashton Kutcher and Mila Kunis respond to the bathing controversy.

Kutcher shared the video on Wednesday on Instagram of Kunis laughing as splashing kids could be heard singing in the background. “You're putting water on the children? Are you trying to melt them?” Kutcher jokingly questions her, “This is ridiculous! What's going on?” She responds, “We’re bathing our children,” as he turns the camera to himself and yells, “That’s like the fourth time this week! Their body oils are going to be destroyed! What are you trying to do?” The hilarious dad captioned the video, “This bathing thing is out of hand.”

People were big fans of the tongue-in-cheek family moment, with social media users leaving comments like, “I was wondering when you guys would address the madness. People made such a huge drama with 5 words. You’re good sport (and great parents I’m pretty sure too).” Another said, “I absolutely love the way you both handle the media. keep living your fabulous life with your gorgeous family.”

It’s lovely to see celebrity parents who don’t take themselves too seriously. And who don’t really care if people are bothered about how frequently they bathe their kids.

More Like This
Princess Charlotte Makes Her Solo Instagram Debut With A Rare Video
Anne Heche Remembered As "Loving Mother" To Her Two Sons After Her Death At 53
Dan Levy Just Proved He's The Ultimate Uncle With This Perfect, Sweet Answer
Drake Shared A Photo Of His New Face Tattoo & It's A Sweet Tribute To His Mom