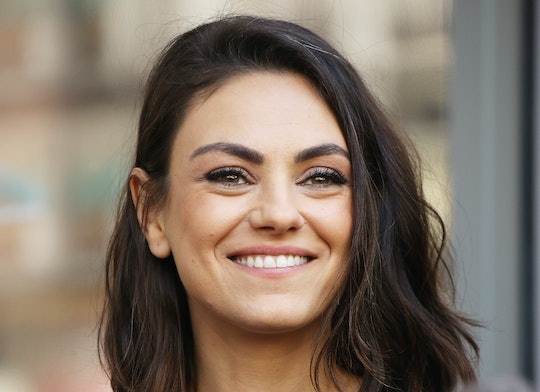 After too many months in quarantine, we all need a little escape.

Beyond the paycheck, turns out there was an added bonus for that Super Bowl ad for Cheetos. Mila Kunis got to hide from her kids during quarantine for a little bit, as she told Ellen DeGeneres in a hilarious interview this week, and filming a Super Bowl ad turned out to be a beautiful two-day escape for both her and her husband Ashton Kutcher.

While speaking with DeGeneres on The Ellen Show, Kunis chatted about her new ad, which also starred Kutcher, as well as how things have been going for her during quarantine with her two kids, 6-year-old daughter Wyatt and 4-year-old son Dimitri. As she told the talk show host, she jumped at the chance to film the commercial even though the timing wasn't great. "It was the peak of the pandemic, it made no sense logically, it may have been the worst time do it," Kunis said. "We were so quarantined, and I was dying to get out of the house."

Kunis also admitted she was ready to get a break from her kids, especially since hiding from them in her house has been getting more and more difficult. "I love my kids very much, we both do, but they're like dogs: they can sniff you out!" Kunis joked. "They know your smell, they know what room you're hiding in — you can't get away from them. You just can't. They're just there."

Mila Kunis told Ellen DeGeneres she was ready for a break from her kids.

To be fair to her kids, Kunis sounds like she's a lot of fun to be around in the house. In fact, she told Brit Morin on the podcast Tell Me Something New last March, according to E! News, that she and Kutcher are sort of "goofy" parents. "I think we're silly at home," Kunis said. "We're very goofy parents when it comes to our children, but that don't have skill. I think that's just being idiots. I think we're very comfortable with ourselves acting a fool at home, but maybe that comes from the idea of being comfortable in your own body, and in your own skin, and in your mind and not having a fear of making a fool of yourself." No wonder her kids are sniffing her out, she's just a lot of fun.

Despite her kids' tracking skills, the Bad Moms star managed to film the Cheetos commercial, which also featured "It Wasn't Me" singer Shaggy. And even though she told DeGeneres she felt like a "horrible mom," she enjoyed "two days off from my kids." If only Cheetos would hire the rest of us moms to film a commercial. We could all use a little escape.