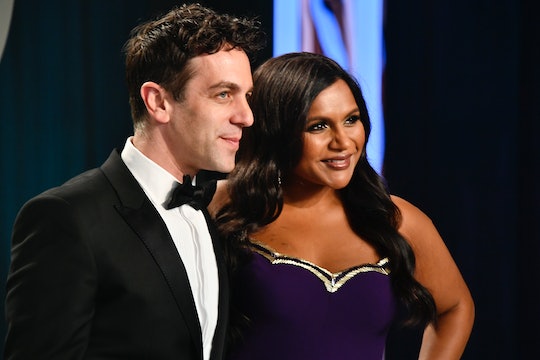 B.J. Novak Will Dress Up As Santa To Surprise Mindy Kaling's Kids

"What's fun about when you have your own kids is you can kind of make stuff up and then just decide that you’re going to do that every single year."

Being a godparent is a very serious role that should be not taken lightly, and one actor understands his role and takes it wholeheartedly. For his godchildren, B.J. Novak will be dressing up as Santa Claus for Christmas. The Office's Mindy Kaling revealed the holiday plans of her former costar during an interview with Tory Burch (Katherine Swati, 3, and her three-month-old son, Spencer, were none the wiser).

"This is the whole ruse that we’re going to do, and this might become a tradition,” Kaling explained, according to People. Novak is the godfather to Katherine. “Her godfather is B.J. Novak, and he is going to show up and go to our living room, where the tree is, in a Santa costume. Just so you know, we’re Hindu and B.J. is Jewish, so this is, like, cultural appropriation on our part.”

Kaling, 41, said that she and Novak planned for him to be "asleep on the sofa" with a bag of toys.

"It's so complicated why Santa was there, why he's taking a nap," Kaling said. "But we're gonna do that. We're like, 'Will she know it's [Novak] on some level?' We don't know."

The Mindy Project alum thought about the idea after being “bummed out” when she couldn't take Katherine to see Saint Nick because of the coronavirus. Kaling also shared the rest of her Christmas plans she had in mind for her and the kids. They include baking cookies, making apple cider and watching Ruldolph The Red-Nosed Reindeer.

The former Office costars' relationship has had its ups and downs. The two have been friends and dated on and off throughout the years. But according to Kaling, they are not just "platonic friends" and Novak is officially "a staple" in her household, she told Good Housekeeping in a 2019 interview.

Kaling added one fun part about creating her and Novak creating holiday traditions for the kids.

"What's fun about when you have your own kids is you can kind of make stuff up and then just decide that you’re going to do that every single year."