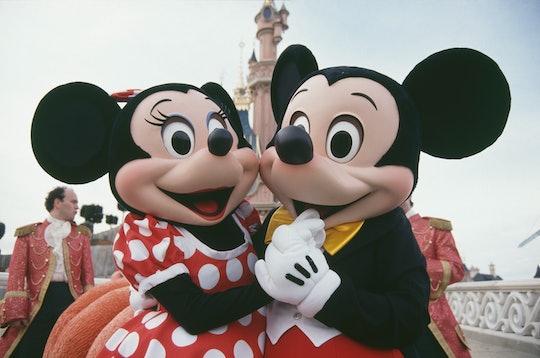 Minnie Mouse Is Stepping Into A Chic Polka Dot Pantsuit

“This new take on her signature polka dots makes Minnie Mouse a symbol of progress for a new generation.”

Minnie Mouse is switching up her wardrobe. To commemorate the 30th anniversary of Disneyland Paris and Women’s History Month in March, Minnie is trading in her signature polka dot dress for a chic pantsuit.

The design was unveiled this past week by Disneyland Paris on the park’s Twitter account. In an illustration, Minnie is depicted wearing a dark blue and black polka-dotted pantsuit with a matching bow. The look was created by British fashion designer Stella McCartney, daughter of singer-songwriter Paul McCartney. “Stella McCartney has designed Minnie Mouse's very first pantsuit, and it's gorgeous,” Disneyland Paris captioned the tweet with a heart-eye emoji.

McCartney was reportedly chosen to create Minnie’s new look because of “her legacy of female leadership,” according to CNN.

“Minnie has always had a special place in my heart. We share the same values,” McCarthy told D23, the official Disney Fan Club, in an interview. “What I love about Minnie is the fact that she embodies happiness, self-expression, authenticity, and that she inspires people of all ages around the world. Plus, she has such great style!”

She added, “This new take on her signature polka dots makes Minnie Mouse a symbol of progress for a new generation. She will wear it in honor of Women’s History Month in March 2022. I can’t wait for you to see this new look at Walt Disney Studios Park!”

Minnie’s new look, however, has been meant with some pushback by fans from style to the color choice. “I wish they kept her classic red! Or made her shoes red, I think it would have popped a bit. The navy/black combo looks fetch in real life but I'm not sold on it for Minnie,” one person tweeted. Another wrote, “I’m redesigning this. Love the idea… despise the execution. ITS NOT EVEN RED???.”

And while this new look is certainly exciting, this isn’t the first time Minnie has worn pants, as one Disney fan observed. But at the end of the day, it’s clear Minnie is not only an entertainment icon, but a fashion icon, too.