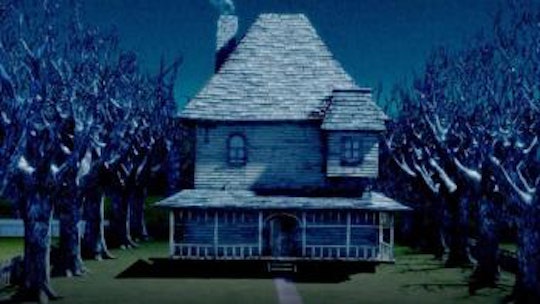 Finding a movie that is just scary enough for kids to enjoy during the spooky season is a tall order. You want to find that sweet spot where they get a bit of adrenaline going and get into the spirit of Halloween but don’t end up staying up all night with nightmares. Could Monster House fit the bill as a just scary enough movie for kids? Or is it too scary? Or not scary enough? Here’s what parents need to know.

What is Monster House about?

At first glance, the 2006 animated feature Monster House seems like the sort of movie that might be for a much older crowd based on the description alone. Three teens discover that a house on their street is actually a living, breathing human who hates children. The owner of the house, Mr. Nebbercracker (voiced by Steve Buscemi) is constantly screaming at children who come near his house, but it turns out he’s doing it for good reason. His late wife has turned into the house and wants to harm children who come near the house after being bullied while she was alive. The teens, DJ, Chowder, and Jenny, try to destroy the monster house on Halloween night after DJ’s mom (Catherine O’Hara) and dad (Fred Willard) leave them with a disinterested babysitter Zee (Maggie Gyllenhaal).

Monster House could be much scarier than it is.

The reality is that Monster House could be a whole lot scarier than it actually is, but manages to skate the line between too scary and just scary enough because of comedic timing. Buscemi plays his role with real, deep venom, which can get pretty scary. but the friendship between DJ and Chowder is full of great one liners, mostly from Chowder, perhaps especially when they meet Jenny and develop crushes on her. There are several scenes that will have both older kids and parents laughing to themselves about, which always makes for a fun movie experience.

What is Monster House rated?

Monster House is rated PG and feels appropriate for kids over the age of 10 years old. Much of it is just too scary for younger kids, especially the final 20 minutes or so when DJ, Chowder, and Jenny get stuck in the house and it starts to attack them. The three kids are also always getting into trouble; they steal cough syrup, break and enter, and use dynamite. Plus they are completely unsupervised, which might seem funny to an older kid but frightening to a little one. As one 11-year-old reviewer wrote on Common Sense Media, “As long as your kid is not sensitive they should be fine, it’s not like this is actually scary it’s cool-ish!!!”

Where can you watch Monster House?

If you and your older kids feel like diving into the Halloween season, you can stream Monster House on Hulu and Netflix. It might just hit that just scary enough sweet spot for you.