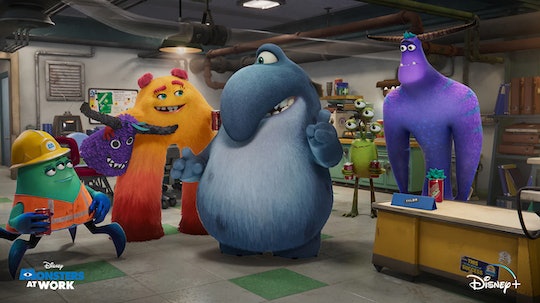 Including the very exciting news that Mindy Kaling will voice a monster named Val.

Mike, Sully, and a few new faces are making a comeback in Monsters At Work on Disney+ and it already looks like it’s going to be a blast. What’s more, the upcoming series will feature some familiar voices like Mindy Kaling.

If you can believe it, it’s fully been 20 years since Monsters, Inc., the Disney/Pixar animated movie featuring monster buddies James P. “Sully” Sullivan and Mike Wazowski who work on scaring children in order to power their city, hit theaters. A bizarre concept that worked, maybe because the monsters eventually met a child named “Boo” who showed them that laughter created more power than fear.

Since the original movie was released, a second installment called Monsters University, a prequel telling the origin story of how Mike and Sully first met, was released in 2013. Both of which starred the voices of John Goodman as Sully and Billy Crystal as Mike and both of which charmed kids and parents alike with their particular blend of brightly colored characters and genuinely solid humor.

Now fans of Mike and Sully and the entire monster universe are going to get a TV series on Disney+. Here’s everything we know about the sweet new series Monsters At Work.

Monsters At Work Will Premiere This Summer

Monsters At Work is set to start streaming on Disney+ on July 2. The original series is set to feature some new faces as well as reprising some old roles.

A new trailer for Monsters At Work on Disney+ dropped on May 18, featuring Sully and Mike and the new MIFT (Monsters Inc. Facilities Team) where monsters work on maintaining machines… although without a whole lot of success, judging by the antics in the trailer.

The trailer also sees Sully and Mike taking over as heads of the new, laugh-focused Monsters, Inc., with Sully excited and Mike not so much. A new monster, Tyler Tuskman (voiced by Ben Feldman) finds himself left out after training to be a scarer, joining MIFT, and seeing the building torn apart by their lackluster skills.

The original series Monsters At Work takes place after the original movie ends, according to Disney. The citizens of Monstropolis are adjusting to their new normal, where they no longer scare children to power their city and work on making them laugh instead. Now monsters like Sully are no longer called Scarers; they’re called Jokesters. This time around, however, Mike and Sully aren’t the main characters — there are a few new kids in town.

Mindy Kaling Will Star In Monsters At Work

Kaling has joined the cast as Val Little, an enthusiastic young monster who is part of the Monsters, Inc. Facilities Team (or MIFT), a role that is sure to impress the actress’ daughter Kit and son Spencer. Kaling will be joined by Ben Feldman, who voices Tylor Tuskman, a young monster fresh out of university who was hoping to be a top Scarer. Unfortunately for Tylor, scaring is out and laughing is in, so he works with MIFT until he can find his way to becoming a Jokester.

Henry Winkler also joined the cast as Tylor’s scatterbrained boss Fritz, while Bonnie Hunt reprises her role as Ms. Flint, the former boss in charge of training Scarers. And don’t worry, Mike and Sully are back for Monsters At Work as well. The series begins one day after the movie ends, which should mean Sully is the CEO of Monsters, Inc. at this point.

This article was originally published on March 20, 2021