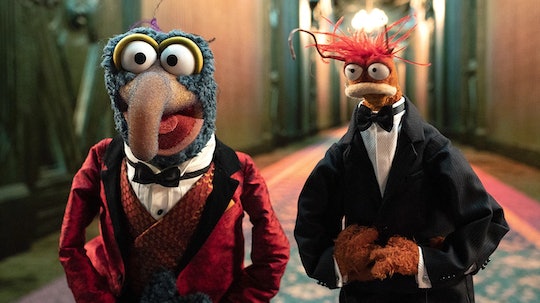 Muppets Haunted Mansion Is The Spooky Crossover Special We Need

Disney knows how to do Halloween. Period. Disney knows what we want sometimes even before we know what we want, and this year is no different. Like the new original special Muppets Haunted Mansion that, for starters, stars Miss Piggy as an irritable fortune teller trapped in a crystal ball. Her and all of the rest of her muppet pals and the amazing human co-stars like Taraji P. Henson. Let’s face it, this movie is not a tough sell for October.

It Takes Place In An Old Mansion On Halloween Night

Gonzo the Great, lover of chickens and daredevil tricks (and voiced by Dave Goelz), gets talked into spending an entire night in a decrepit old mansion by his pal Pepe the King Prawn (Bill Barretta). And not just any old night; Halloween night. They are greeted by their Ghost Host, played by Will Arnett, and the trailer for Muppets Haunted Mansion sees them trying to get through the night as ghosts continue to reach out to them from beyond the grave. Henson plays The Bride, Darren Criss plays The Caretaker, and Yvette Nicole Brown plays The Hearse Driver.

And Miss Piggy is annoyed by all of the ghoulish moaning, telling the ghosts to keep it down because “she can’t hear herself think.” Full of sass, even when speaking from inside a crystal ball.

You Can Stream It On Disney+

Muppets Haunted Mansion will be available for streaming on Disney+ on Oct. 8. Just in time for Halloween viewing!

Why Is It So Familiar?

The movie is set in the very same Haunted Mansion ride we all know and love from Disney Parks around the world. There has already been one live-action movie based on the Haunted Mansion attraction released in 2003 called, you guessed it, Haunted Mansion, starring Eddie Murphy. This version is already available for streaming but has not been “Muppetized” like the new original special.

Those muppets love to sing and perform, so naturally there will be new music in Muppets Haunted Mansion. Three spooky new songs, “Rest In Peace,” Life Hereafter,” and “Tie The Knot Tango.”

Put some time aside with the family to watch Muppets Haunted Mansion, streaming on Disney+ on Oct. 8. Between Kermit and Miss Piggy and all of the celebrity cameos, it’s going to be a blast.

More Like This
The Hocus Pocus 2 Soundtrack Is A Spooky Mix Of Old & New
Witchy Vibes, Salty Language, & More: What Parents Need To Know About Hocus Pocus 2
You Can Stay At A ‘Hocus Pocus’ House On Airbnb — And It’s In Salem!
Here's Where The 'Hocus Pocus' Characters Are 30 Years Later