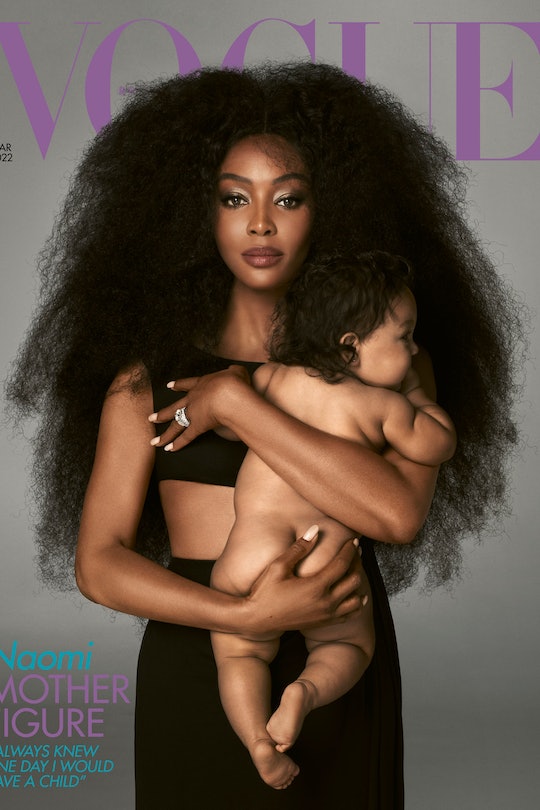 The supermodel also confirmed some details about her daughter’s arrival last year.

Supermodel Naomi Campbell made jaws drop with yet another incredible magazine cover photo shoot. The 51-year-old actress and mother of course looks stunning, but Campbell also used the opportunity to introduce the world to her 9-month-old daughter for Vogue UK’s March 2022 cover story.

Campbell announced via Instagram in May that she’d welcomed her first child. “A beautiful little blessing has chosen me to be her mother,” she wrote in an Instagram post that has since been deleted. “So honoured to have this gentle soul in my life there are no words to describe the lifelong bond that I now share with you my angel. There is no greater love.”

Now, with several months of motherhood under her belt, the British supermodel has opened up to Vogue UK about it all, and also revealed some sweet details about her daughter. “I’m lucky my little one loves to travel like me — no whimpering taking off or landing,” the cover star told the magazine. “She’s a good girl: she sleeps very well, she hardly ever cries and I’m told she’s very alert for her age. She’s just started waving, which is fun. She laughs a lot. She’s almost talking ... I think she might walk before she crawls. And she’s got six teeth already.”

And not only did Campbell reveal to Vogue UK that her daughter, whose name has not been shared with the public, is a “trooper” through teething, but the baby also made her magazine cover debut in her mama’s arms. In the photo, Campbell is holding her little girl close her chest with one side of her face toward the camera. As Campbell’s followers on Instagram unanimously agree, she’s beautiful.

“She’s everything,” one commented on her post. Another said, “Now THIS is magic!!” One more declared, “THIS IS YOUR BEST COVER.”

While Campbell did not immediately share details about her daughter’s arrival last year, she did share with Vogue UK that “she wasn’t adopted — she’s my child,” adding that she plans to share the rest of her story in an upcoming book.

Though updates have been rare, this isn’t the first time Campbell has opened up about motherhood. During a September interview with BBC HARDTalk, she revealed that she could already tell how “independent” her daughter is. “I’m really lucky, I think I have a dream child,” she said at the time, per Hola!. “She is wonderful, she’s very independent already. Very smart, alert, sleeps 12 hours. Good girl.”

Good sleeper, a teething “trooper,” and a giggly baby girl... Campbell is one lucky mama.

More Like This
Meghan Markle Calls On Men "To Be Vocal" In The Aftermath Of Roe v. Wade Ending
Ginger Zee Had A Perfect Response After A Troll Asked Her "Who's Raising Your Kids?"
Chris Pratt Says He "Cried" About That "Healthy Daughter" Instagram Post Controversy
Ireland Baldwin Shares Her Abortion Story In An Emotional TikTok