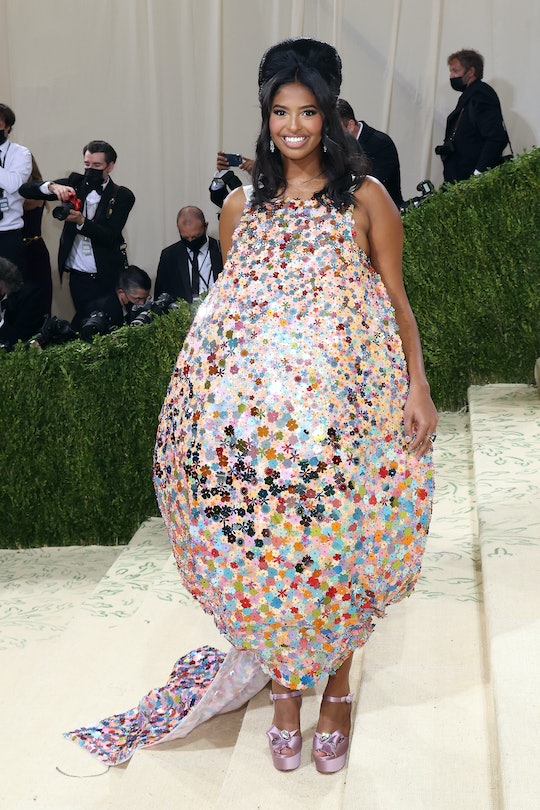 It was a glamorous and fabulous evening for Natalia Bryant on Monday night as she attended her first Met Gala. Smiling on the white carpet of the biggest night in fashion, the 18-year-old daughter of the late Kobe Bryant dazzled in a sequined, ‘60s-inspired balloon dress by Conner Ives and lavender platform heels with a bouffant.

The theme for this year’s Met Gala at the New York Metropolitan Museum of Art was “In America: A Lexicon of Fashion.” To match the theme, Bryant told Entertainment Tonight she wanted her look, which will be part of the museum’s exhibit, to be “fun” and youthful.

“I definitely wanted to do something really fun and young,” she told Entertainment Tonight. “I’m so glad Anna Wintour allowed me to wear this exhibit dress. This just feels like a dream... Having my whole family support me is just so nice tonight… it means everything.”

Her mother, Vanessa Bryant, shared a picture of her daughter on her Instagram and captioned it, “Bringing back preschool drop-off feelings as I send my firstborn off to her first Met Gala.”

Natalia is currently a freshman at the University of Southern California, where she plans to major in film, as she shared with Teen Vogue. In addition to her film aspirations, she’s also interested in fashion beyond the Met Gala. Earlier this year, she signed with IMG Models and nailed a Bulgari’s Mother’s Day campaign with her mother.

Before posing for photographers at the Met Gala, the 18-year-old had her first major photo shoot when she was the September cover star of Teen Vogue.

It’s undoubtedly been tough for Natalia and her family since losing her father and her little sister, Gianna, in the helicopter crash that claimed their lives and seven others on Jan. 26, 2020. As she shared with Teen Vogue, they’re doing “the best that you can” and she tries to stay strong for her little sisters, Bianka Bella, 4, and Capri Kobe, 2. “[For] my little sisters [we’re] trying to keep that memory for them. And also just trying to remember to live out every day the way they would.” Whether it’s a gorgeous debut Met Gala appearance or starting college, it looks like she’s doing just that.