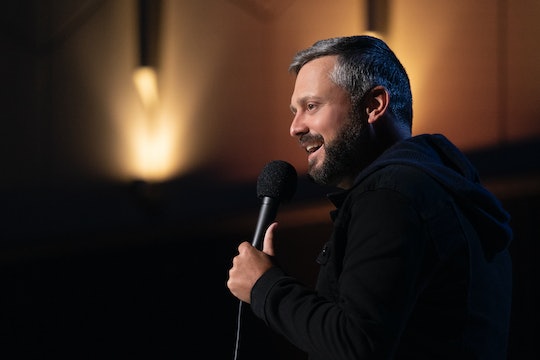 The Greatest Average American is heading to Netflix on March 18.

It can't be easy being related to a stand-up comedian, but Nate Bargatze' wife, daughter, and family are seriously his best material. He's pretty gentle with his comedy, and he is definitely the butt of the joke most of the time. But with his second hour-long Netflix comedy special set to be released in March, perhaps it's time we all got to know Bargatze' wife and the rest of the family. It's nice to have a bit of background, right?

The Tennessee-born comedian's newest hour-long comedy special, The Greatest Average American, is coming to Netflix on March 18. As always with Bargatze, his comedy will cover a range of personal stories like how he met his wife when he was working at Applebee's when he was younger and more tales from his life as a dad and husband.

Bargatze’s new special was filmed outdoors and socially distanced to keep up with COVID-19 safety measures. And in keeping with the COVID-19 era, Bargatze announced his new special in a very pandemic-y way. In a video shared on Instagram, he sat beside his daughter as she was remote learning on her laptop until she pushed him away and said, "can you go in the other room, I can't hear Mrs. Clark." So let's meet this daughter who is decidedly unimpressed with her famous dad.

Born in 2012, Harper Blair Bargatze is the newest member of the family, but she's already become a big part of her dad's stand-up routine. So much so that she was the one to introduce her dad on his last Netflix comedy special, The Tennessee Kid. At the time, Bargatze told Forbes that the moment was really lovely for them both, "I just thought it was something neat and different, with me and her doing this thing together and having her introduce me."

Bargatze has used his experience as a dad as fodder for his routine several times, including Harper's birth back in 2012. He opened up on stage about how he wished "it was like the 50s when they didn't even let me in the hospital. But it's not. Now the doctors are like 'why don't you deliver the baby? Like why don't you do most of it?" He was concerned about cutting the umbilical cord because "I didn't take a class. They just act like I'm the guy who cuts the umbilical cords at the hospital." Clearly, both he and Harper survived.

Nate Bargatze has been married for years.

Bargatze is married to Laura Baines-Bargatze, and they've been a couple since they worked together at Applebee's before his stand-up career took off. Laura is a frequent guest on Bargatze's podcast The Nateland Podcast — she's also a producer for it — and recently told listeners about how The Little Mermaid brought the two of them together in their early 20s. "He put in The Little Mermaid soundtrack," she said. "And then told his friends to like 'shush, shush, I'm listening to this song." He sang along in front of his friends, and won the heart of his future wife in the process.

Little did she know at the time that she would become one of the main sources for Bargatze's routine, where he covers everything from not liking her photos on social media and fighting over chocolate milk. As he explained the fight they had when he brought chocolate milk home and tried to insist it was meant for drinking post workout. His wife did not agree, telling him, "'That's just the milk people pushing chocolate milk,' and I was like, 'you don't even know what that statement means.'"

Stephen Bargatze is a famous magician.

Nate Bargatze isn't the first famous person in his family; his dad Stephen is actually a well-known magician. When he was a child he would sometimes join his dad on stage, so it makes sense that the comedian was excited to include his magician dad in his Las Vegas act in 2019. "It's like the crazy dream to play Vegas," he told Forbes at the time. "And especially coming from the world of where I've come from with my dad, it's a huge thing. My dad…is on the show with me…So it will be a very cool thing to do — to have me and him get to do Vegas together. It's gonna be unbelievable."

As a comedian, Bargatze dips into the family well pretty frequently. He has mentioned his extended family on occasion, his wife almost always, his daughter. And of course, his mom. Who is apparently just named "mom." As in "don't let your mom hire the D.J." for your wedding. "I don't know who thinks to ask someone in their 50s for DJ recommendations," he joked in one bit. I can't decide if Bargatze's mom should be relieved that she's not used as fodder as often or insulted. As moms, I think we all know the answer to that question.