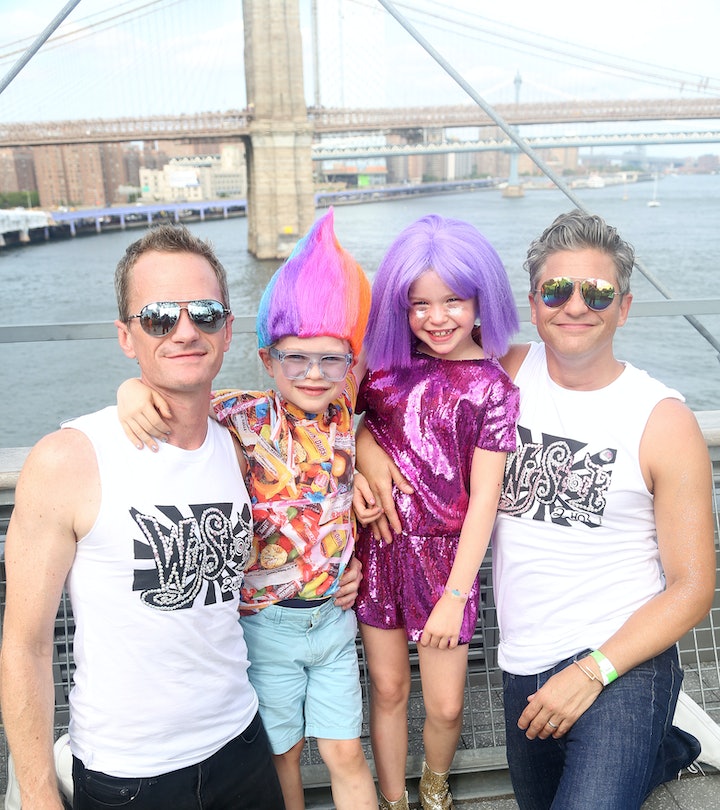 "It's been important for us to try and treat each day as if it's unique."

Wake up, coffee, get the kids ready for Zoom class, more coffee, stare into the fridge... The days of quarantine, let's face it, have become redundant. "It seems most challenging to try and take each day as if it's new and not fall into repetitive behaviors," actor Neil Patrick Harris admits to Romper in a recent phone interview. But, don't worry, the dad of two has shared the clever way he's avoiding the ever-present quarantine boredom with his kids. Spoiler alert: It involves food.

"It's been important for us to try and treat each day as if it's unique," says Harris, who shares 10-year-old twins Harper and Gideon with husband, David Burtka. And to keep things fresh for their twins, Harris and Burtka intentionally plan a variety of different activities — but it doesn't necessarily need to be something fancy or elaborate. "Whether that be we have a themed night for dinner, or whether it be we find a good documentary that we can all watch together," Harris says. "Just to differentiate the days so that they don't all wind up blurring together."

Earlier this month, for example, Harris hopped on Instagram Live to give fans a peek into his family’s “make your own sushi” dinner. Viewers were treated to Burtka, a professional chef, breaking into song as he prepared various sushi rolls, young Gideon telling jokes, and, at one point, Harper and Gideon hilariously pleading with their dad to never refer to Burtka as his “hubby” again.

But planning themed dinners and movie nights for his kids isn't the only thing keeping Harris busy these days. The actor recently partnered with PayPal and Venmo to share how Americans can make their trips to the store even safer with PayPal and Venmo's touch-free payment QR Codes at CVS. To demonstrate just how quick and easy it is to pay using PayPal or Venmo, the companies armed Harris with a cell phone and sent the actor to a CVS for a bit of a shopping spree.

Of course, Harris' twins still get antsy — we are, after all, 10 months into a global public health pandemic that has kept most children out of the classroom and most families cooped up at home. And although his kids "have a little more room to run around" after he and Burtka relocated from Manhattan to an area of New York state, they still can't see their friends. "They're still only running around with each other, so they get antsy and more cantankerous, I think than they would if they had after school group sporting activities and more playdates. But we're trying to make the best of it," Harris says.

Like many other parents, Harris has seen his twins' screen time grow. In fact, he once caught his kids on camera watching YouTube videos when they were supposed to be doing virtual school. "I think they're probably getting to play on their iPads, on their screens, more than I would prefer," he admits. "But I'm giving them a bit of a pass because there's not a lot of other options."

Still, parenting challenges aside, Harris says he and Burtka are grateful for all the extra time the pandemic has allowed them to spend with their twins. "We've gotten to learn more about them, share more with them, and really spend every single day together as opposed to some parts of the day with each other," Harris says. "And while it does have its drawbacks, I hope that we look back on this last year and find more than a few silver linings of bonding and sort of intimacy that we wouldn’t have shared otherwise."