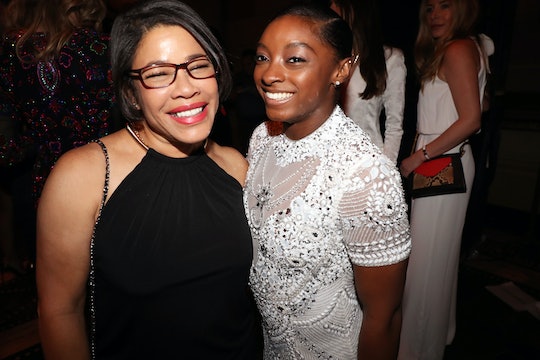 Exclusive: Nellie Biles Shares The Moment She Knew She Was "Truly A Mother" To Simone

“You wake up one day, and you realize that you would do anything for these children.”

Simone vs. Herself, a new seven-part docuseries on Facebook Watch, pulls back the curtain on Simone Biles’ journey to the 2021 Summer Olympics and how she became the most decorated gymnast of all time. That story, of course, includes her biggest cheerleaders: her parents. In an exclusive look at the newest episode of Simone vs. Herself, the 24-year-old athlete’s mother, Nellie Biles, speaks candidly about adopting Simone years ago and when she felt she was “truly a mother.”

Nellie and Ron Biles, who is Simone’s biological grandfather, adopted the young Olympian and her younger sister Adria in 2003 after they were placed in foster care, along with their two older brothers, Tevin and Ashley. “Growing up, my biological mom was suffering from drug and alcohol abuse, and she was in and out of jail,” Biles shared during an episode of Dancing With the Stars in 2017. “I never had mom to run to. I do remember always being hungry and afraid. At 3 years old, I was placed in foster care.”

When she was just 6 years old, Simone was adopted by Nellie and Ron Biles, who became mom and dad to her and younger sister Adria, moving down to Spring, Texas, to be with them. And in an exclusive look at Simone vs. Herself, Nellie admits it was a struggle for her to bond with the two little girls at first. She was already raising two sons of her own, and overnight she became a mother of four.

“I knew I had my own barriers because these were not my biological children. You do everything that’s nurturing, that’s mothering, but emotionally, you still have to be there 100%,” Nellie explains.

In a truly courageous, honest moment, Nellie shared that she was not there 100% at first. That it took time for her to find her way as a mom to Simone and Adria. “I remember praying for that bonding. Because telling them that you love them and you care for them; that’s all words. But then you wake up one day, and you realize that you would do anything for these children. And that you would die for these children. And when that feeling comes, that’s when you know you are truly a mother.”

Since then, Nellie Biles has become a source of consistent support for Simone. So much so that the gold medalist is worried about the Olympic Games in Tokyo this year. The International Olympics Committee announced that no foreign spectators would be allowed in the stands, only Japanese nationals, as a precaution for COVID-19. Which means family will not be able to attend and will mark the first time Nellie Biles won’t be in the audience, cheering for her daughter.

As difficult as it might be to compete without them, Simone Biles will have her parents waiting to welcome her home. Just as they did all those years ago, when they became her parents.

Episode 3 of Simone vs. Herself debuts at noon ET on June 29 on Facebook Watch.

More Like This
Janet Jackson's Son Eissa Is A Little Musical Prodigy In The Making
Catherine Reitman Calls It Like She Sees It: “Being A Working Mother Is Impossible”
Jenny Slate Played Our Parenting Edition Of Never Have I Ever & Here’s What We Learned
Ciara’s Kids Make The Sweetest Cameo In Her New Song “Treat”