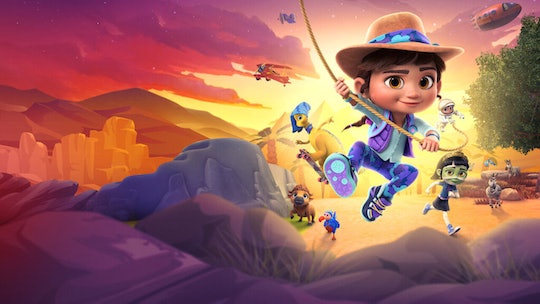 Get ready to meet Fred the Bison!

This July, a new preschool series will premiere on Netflix with an inclusive milestone. Premiering under the streaming service’s “Representation Matters Collection,” Ridley Jones, will introduce the first nonbinary character on a Netflix children’s series. So here’s everything you need to know until it’s available to stream.

When Will Ridley Jones Premiere?

Ridley Jones will be available on Netflix on July 16, so mark your calendars now!

Ridley Jones Is About A Kid Who Lives In A Treehouse

Yes, that’s right. Ridley Jones follows a 6-year-old who lives in a treehouse inside the Museum of Natural History with her mother and grandmother. And at night, the museum’s exhibits come alive. Yes, it gives off a bit of Night At The Museum vibes!

“This is the first show I brought to Netflix. I really wanted to do a series where a girl was the action-adventure star I always wanted to see (or be) when I was growing up," creator Chris Nee said in a press release. "Like so many of my shows, this world is a perfect canvas upon which to create a community of oddball characters and model what it means to take care of each other, even if you aren't from the same era of time or wing of the museum.”

The animated series will feature LGBTQ+ characters, including Netflix’s first nonbinary character in a children’s series. West Side Story’s Ezra Menas will play Fred, the nonbinary bison, and Ridley’s friend.

The National Center for Transequality defines non-binary people as an individual whose gender is not male or female. “Some people don't neatly fit into the categories of ‘man’ or ‘woman,’ or ‘male’ or ‘female,’” the National Center for Transgender Equality explains. “For example, some people have a gender that blends elements of being a man or a woman, or a gender that is different than either male or female. Some people don't identify with any gender. Some people's gender changes over time.”

The first episode of Season 1 is available now on YouTube and then all six episodes of the first season will debut on Netflix on July 16. So mark your calendars!

More Like This
Exclusive: Watch How A Group Of Princesses Save The Day In Netflix's New Animated Series
The Best Valentine’s Day TV Episodes For Kids
We Ranked The Best (& Worst) Games Our Kids Learned From 'Bluey' — You're Welcome
10 Great Podcasts That Will Keep Your Kids Entertained On Your Next Family Road Trip
What Parents Are Talking About — Delivered Straight To Your Inbox