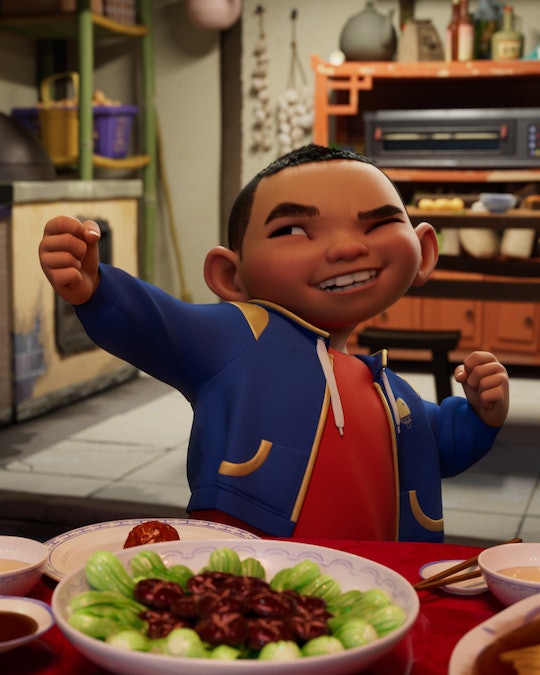 Netflix’s new animated film Over the Moon, which started streaming Friday, gifts us with Asian American representation through gorgeous animation and an all-Asian voice cast. The film is visually stunning and completely magical, but it's also a conversation starter to counteract messages of anti-Chinese racism with a love of Asian culture — and it's what kids need to see right now.

During the pandemic, we're experiencing an unprecedented increase in hate crimes against Asian Americans. Even more tragic, Stop AAPI Hate, a national center formed to track and respond to incidents of hate and discrimination, reported that youth are more likely than adults to be harassed at school, public parks, and online. It is more important than ever for parents to teach children about anti-racism. And, when the president is modeling hate speech by calling COVID-19 the “Kung flu” and the “China virus,” there’s a limit to how much we can shelter our impressionable children from the influences and effects of hate. What we can do as parents is teach a love for other cultures.

Over the Moon is the perfect vehicle to ignite wonder, curiosity, and love in the minds and hearts of our children.

As an Asian American parent of a 7-year-old, I’m excited for this surprise assist from Netflix to appreciate Chinese culture with the premiere of its original film. Over the Moon is about a smart young girl named Fei Fei, who is still grappling with her grief after losing her mother, and who builds a rocket ship to prove the existence of the mythological Chinese goddess of the moon. Directed by legendary Disney animator Glen Keane (Dear Basketball, Aladdin, Little Mermaid), the musical film features a talented all-Asian cast, including newcomer Cathy Ang as the main character Fei-Fei, Hamilton’s Philipa Soo as the Moon Goddess, with Ken Jeong, John Cho, Sandra Oh, Margaret Cho, and more. Set in an idyllic town in China during the Mid-Autumn Festival, Over the Moon is the perfect vehicle to ignite wonder, curiosity, and love in the minds and hearts of our children.

Cast member John Cho effectively sums up why this film is so important at this moment in time. “Right now when as a planet, we’re struggling with our capacity for empathy and understanding each other as human beings, to have that connection to Fei Fei, this character who’s experiencing grief,” Cho said in a press statement. “It was an exercise in understanding our common humanity.”

By showcasing a family in China that cooks together, laughs and mourns together, and loves one another, the film reminds us that wherever we live in the world and whatever we look like, we’re not too different.

Hatred is born of ignorance and fanned by fear and isolation. Over the Moon counteracts this hatred toward Asians during this pandemic by inviting viewers young and old into the intimate and relatable life of a Chinese family through masterful animation and adorable characters. By showcasing a family in China that cooks together, laughs and mourns together, and loves one another, the film reminds us that wherever we live in the world and whatever we look like, we’re not too different.

Seeing characters that look like him on screen, enjoying the type of food I cook, and celebrating a holiday that he’s known privately all of his life boosts in my child a cultural pride, subverting racist messages he may be receiving in this difficult year and beyond. With the help of the film, I want him to learn that China is a beautiful, lively place, not a country to fear and despise. The work shouldn’t stop with my own family though. I want families of all backgrounds to be able to partake in a mini-cultural immersion in this time of need.

To help other families accomplish this, here are seven activities, inspired by Over the Moon, to transform a simple family movie night into a cultural celebration:

1. Download this free, gorgeously designed official Over the Moon Coloring Book from Netflix. The book features beautiful artwork from the film as well as the story of the Moon Goddess legend and why she is honored at the Mid-Autumn Festival.

2. Support your local Asian-owned restaurants, bakeries, and grocery stores, who are hurting during this pandemic, by ordering food for takeout or delivery. In addition to the mooncakes featured throughout the movie, duck, crab, pumpkin, pears, and watermelon are also popular during this festive, harvest season. Many of the foods enjoyed during this Thanksgiving-like holiday celebration are round to symbolize unity and coming together.

3. Mooncakes are a Chinese pastry filled with a variety of ingredients, such as red bean or lotus seed paste. I like this easy recipe for mooncakes, but for the more ambitious, here’s another recipe with made-from-scratch ingredients. If you want minimal fuss, another great idea is just to make pretend mooncakes with playdough.

4. There are several good book options out there that focus on the Mid-Autumn Festival, also called the Moon Festival. Moon Festival Wishes by Jillian Lin is an attractive, bilingual picture book that explains how the holiday is celebrated and recounts the moon goddess myth. Lin’s book also includes discussion questions for young readers. Older kids might enjoy the classic by Amy Tan, The Moon Lady, which was adapted from the well-known The Joy Luck Club. If your kids get hooked on the movie Over the Moon, there is a picture book and novel based on the film as well.

5. I have fond memories from my childhood craning my neck at the moon, trying with all my might to see the moon goddess and the jade rabbit. Though I never found them, I had fun trying and letting my imagination run free. My son loved nestling together as a family with his cup of hot ginger and honey tea with Chinese pastries under a full moon. These are memories we will treasure. The next time there’s a full moon, grab some tea and snacks and enjoy moon gazing.

6. Incorporating a Mandarin language lesson with these Mid-Autumn Festival words might be a fun way to connect kids with the world beyond their own borders. This video by language resource library Lingo Buddies teaches you how to say related holiday terms like “full moon,” “mooncake,” and “rabbit” in Mandarin with cute, illustrated flashcards. Watch Over the Moon in Mandarin or Cantonese if you’re feeling advanced.

7. Families of color do not have the privilege of waiting to discuss race with their kids. Race and racism are a part of our daily lives, and it’s a topic that we must discuss within our families as early as toddler age or earlier, which is when kids first become aware of race. This is the time to explain why blaming the spread of an illness on one community is unjust when similar outbreaks have started in the US or Europe. A dialogue about how this pandemic could have begun anywhere, that this is when everyone should come together to find solutions for this global health crisis, is essential. According to Teaching Tolerance, if a child hears or uses racist rhetoric, it is important to respond and address it immediately to interrupt racism and correct it.

Over the Moon provides an apt prompt both to have fun with Chinese culture and to reinforce anti-racism during a time when we need it most.