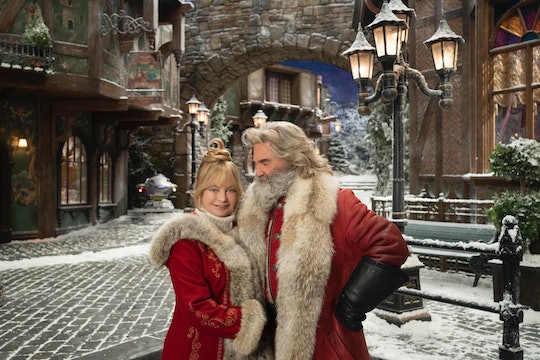 The real-life couple comes together again to deliver that on-screen magic we know and love in The Christmas Chronicles 2. This time, however, Hawn's character as Mrs. Claus really gets to shine. And considering that the first movie earned about 20 million streams within the first week, according to IndieWire, the sequel is expected to be a hit as well.

So without further ado, here's everything you need to know about Netflix's upcoming Christmas flick.

What's The Christmas Chronicle 2 About?

In The Christmas Chronicles, a young girl named Kate and her cynical older brother Teddy attempt to capture Santa on film. After they catch Santa in the act and hide in his sleigh in hopes of recording more evidence, a startled Santa crashes and the trio has to work together to save Christmas.

Now that a few years have passed, The Christmas Chronicles 2 will tell a different but equally exciting story. According to Netflix, the sequel follows Kate, now a teenager, as she spends Christmas in Mexico on vacation with her mom, her mom's new boyfriend, and his son Jack, who she doesn't totally get along with. After deciding to run away, Kate is pulled back to the North Pole with Jack and reunited with Santa in an effort to defeat a magical troublemaker named Belsnickel and save Christmas for good.

Hawn did not have a big role in the first movie; the actress made a brief cameo at the end. But you can expect to see a lot more of her in the sequel as a trailer reveals Mrs. Claus giving tours of the North Pole village, providing support to Kate and Jack, and pointing out the obvious to her partner. "Sometimes I think you actually enjoy these dangerous escapades," she tells Santa in the trailer.

Speaking of trailers, Netflix released a peek at The Christmas Chronicles 2 on Oct. 19, showing Santa taking on the evil Belsnickel and more.

You'll be able to stream The Christmas Chronicles 2 on Netflix on Wednesday, Nov. 25. The date, of course, is the day before Thanksgiving, which means you'll have some excellent pre-turkey content to really put you in the mood for the holidays.

The Sequel Will Debut In Theaters, Too

According to Netflix, The Christmas Chronicles 2 will also debut in select movie theaters that same month, so be sure to check with your local theater for listings.

When it came time to portraying Santa in the first movie, Russell told Global News Canada in 2018 that he did some serious research because he knew he had some big shoes to fill. "He is one of the few characters whose existence has maintained its life then grown in itself a level of importance to the world over 1,700 years," he told the news outlet. "Santa Claus is not a comic book character and I was just excited about playing a guy who wasn't just a jolly old myth or just an illusion or just magic or just a Hollywood creation of fun movies and things I've enjoyed watching. This was the real guy I got to play."