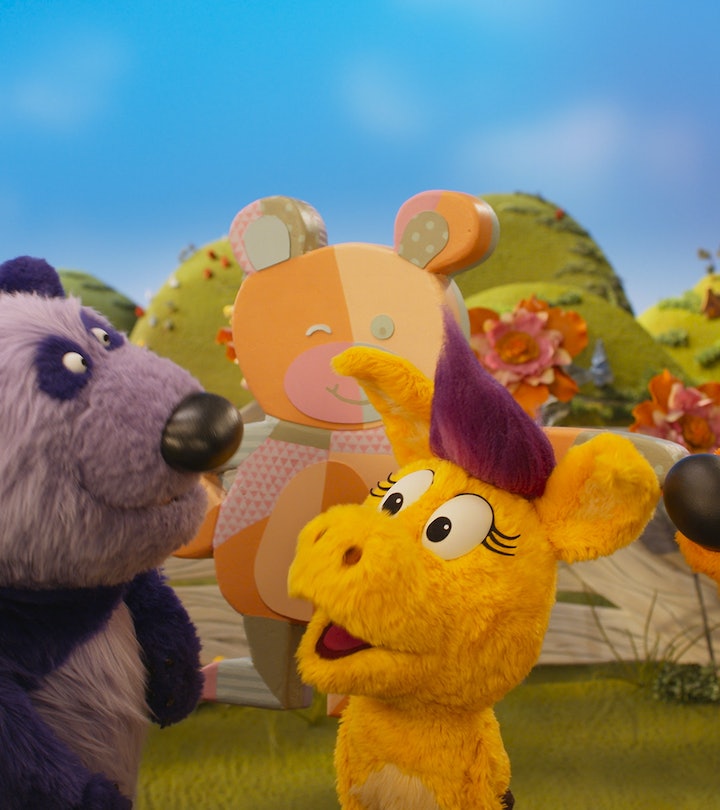 Donkey Hodie is a little donkey with a big can-do attitude.

Who better to bring us a super optimistic, bright and sunny new kids’ show than the puppeteer for Cookie Monster? The talent behind the famous Sesame Street muppet, David Rudman, and his brother Adam, co-founders of Spiffy Pictures, have created a fun news series with Fred Rogers Productions called Donkey Hodie coming to PBS Kids on May 3. The show is about a sweet little donkey with a can-do attitude and, according to the Rudman brothers, kids are going to absolutely love it.

Fred Rogers Productions, home of Daniel Tiger’s Neighborhood, and Spiffy Pictures, the company behind Nature Cat, have teamed up to bring a quirky character to life. Donkey Hodie was originally a character featured in Mister Rogers’ Neighborhood from 1968 to 1993. In the new series, the original character makes a return as “Grampy Hodie” and hands over the reigns to his spunky little granddaughter, the new Donkey Hodie. “I think kids will really love Donkey’s perseverance, positive optimistic, doesn’t give up,” Adam tells Romper. “She’s really funny. Kids will enjoy watching her.”

In the show, Donkey and her friends find themselves getting into situations where they have to work together and persevere to solve their problems, with hilarious results that will empower kids to be resilient as well. “[Families] will be rooting for Donkey to succeed,” David, who also designed all of the puppets featured in the new series, tells Romper. “She’s so full of hope and so optimistic, people will want her to make her dreams come true.”

While Donkey Hodie is a new show, it features at least one familiar voice; David is the puppeteer for both Bob Dog and Grampy Hodie.

In an exclusive clip shared with Romper ahead of the show’s premiere, little fans are introduced to Donkey Hodie’s hilarious group of pals along with some clever Easter Eggs for Mister Rogers’ Neighborhood fans. And the songs are pretty terrific as well.

While he loves puppeteering both characters, the upbeat little donkey is not exactly like Cookie Monster, who he has been performing since 1985. “Donkey has a very different vibe from Cookie Monster,” David says. “Donkey feels a lot more like a Spiffy Pictures vibe, like our show Nature Cat. Donkey is all about physical comedy, fun, and an endearing character everyone’s rooting for. “

Each episode of Donkey Hodie, aimed at kids between the ages of 3 to 5, will also feature original music — new songs along with reimagined songs from the original Mister Rogers’ Neighborhood series. You can catch the premiere of Donkey Hodie on Monday, May 3 on PBS Kids.

More Like This
A Guide To Every Dog Breed In 'Bluey'
Exclusive: CoComelon Is Going On A Live Tour Across the U.S.
Netflix Has Lots For Families To Look Forward To This August
The New A League of Their Own Trailer Just Dropped & It Looks So Good