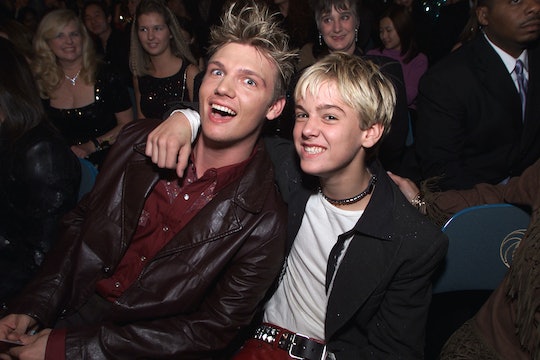 “We’ve got a little bit of heavy hearts ’cause we lost one of our family members.”

The Backstreet Boys paid their respects to Aaron Carter, Nick Carter’s younger brother, during the group’s concert in London over the weekend. During the emotional, touching moment, a black-and-white picture of Aaron, who died at the age of 34 on Nov. 5, was projected across the jumbotron.

In a video shared on Twitter, the Backstreet Boys had just finished performing a single from their latest DNA album, which member Kevin Richardson called a special song to them because it was “about family.”

Richardson went on to recognize their loss of Aaron, who was found dead in the bathtub of his home in Lancaster, California, according to the Los Angeles Times. The former child pop star is best known for his hits like “I Want Candy,” “Crush on You,” and “I’m All About You.” His fifth and final studio album, Love, was released in 2018.

“Tonight, we’ve got a little bit of heavy hearts ’cause we lost one of our family members yesterday,” Richardson said during the concert, “and we just wanted to find a moment in our show to recognize him.”

At one point, Nick broke down crying, and his bandmates AJ McLean and Brian Littrell went to console him.

Nick mourned his brother’s passing with a touching Instagram post, in which he shared childhood pictures of the two of them. “My heart has been broken today,” he wrote on Sunday. “Even though my brother and I have had a complicated relationship.”

Over the years, Aaron had opened up about his struggles with opioid addiction and his mental health, telling The Doctors in 2019 he’d been diagnosed with “multiple personality disorder, schizophrenia, acute anxiety, and manic depression.” That same year, Nick sought a restraining order against his brother, according to Page Six.

“My love for him has never ever faded,” Nick’s Instagram post continued. “I have always held on to the hope that he would somehow, someday want to walk a healthy path and eventually find the help that he so desperately needed. Sometimes we want to blame someone or something for a loss, but the truth is that addiction and mental illness is the real villain here. I will miss my brother more than anyone will ever know. I love you Chizz. Now you can finally have the peace you could never find here on earth….God, Please take care of my baby brother.”

Aaron was a father and leaves behind an infant son, Prince, whom he shared with fiancée Melanie Martin. Hours before his death, Aaron posted a final social media message about “being gone.” The comment was made in one of his rap lyrics in a snippet of a music video he made with rapper CheckTheStar. “I’ll tell my honey I’ll be gone,” he rapped in “Lately,” “but not for long.”