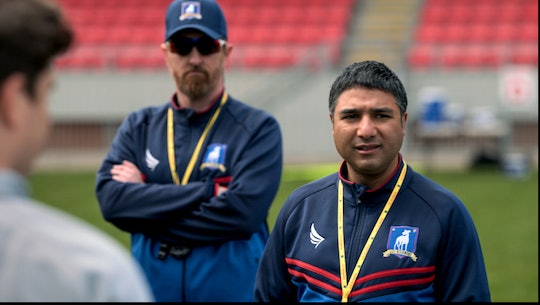 Nick Mohammed From Ted Lasso Is A Proud Family Man

Nick Mohammed, the actor who plays Nathan Shelley on Ted Lasso, has done such an incredible job adding nuance to the character that he has been nominated for a Best Supporting Actor Emmy. He seems like a relative unknown to American audiences, but the reality is that Mohammed has been steadily working in the entertainment industry in the United Kingdom for 15 years. Mohammed also has a wife and children, although he’s not a big fan of talking about them or sharing information on social media. Instead he focuses on his work, and these days that work is pretty exceptional stuff.

Nathan Shelley, or “Nate the Great” as Ted Lasso affectionately calls him, is one of the most popular characters on the AppleTV+ hit series. In the first season of the show, there’s this vulnerable sweetness to Nate’s character that is utterly endearing. And integral to the father-son story arc that seems to be so prevalent to Ted Lasso’s charm. Even when Nate the Great gets a bit too big for his britches in the second season, it all stems back to that dynamic. “I don’t think it’s giving anything away in saying that a lot of his insecurities and so on stem from the fact that his relationship with his dad is not great,” Mohammed told The Playlist. “And I think Ted Lasso, the show in itself, examines that father-son, or mentor-mentee relationship quite a lot.”

As a father to sons himself, perhaps it’s a dynamic Mohammed is already starting to understand.

His Wife Is A Teacher

Nick Mohammed has been married since 2014.

Mohammed has been married to wife Becka, who is reportedly a teacher, since 2014. The comedian announced the exciting news via a tweet featuring a hilarious drawing of the event by his niece, and has kept things pretty quiet about her since. The couple have been spending their time in London with their two children, Mohammed told the Evening Standard.

His Wife Is Funny

The Ted Lasso actor told The Guardian in 2017 that there is one person who makes him laugh the most. His wife. “Pretty much every day she’ll say something that makes me roar with laughter (which I’ll then secretly write down).”

He Has 2 Little Boys

Mohammed and his wife are parents to two sons, aged 4 and 2, and while he doesn’t share information about them, he did share a hilarious “Lockdown” video with them as the three all hung out in what appears to be their playroom.

Seeing him play with his sons, as they climb all over his back and sing along with his renditions of Disney songs, gives a real glimpse into his own father/son dynamic. And honestly, it just looks like a blast.