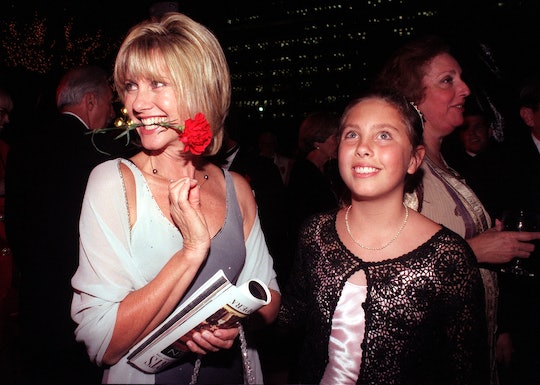 The beloved actress passed away at the age of 73 after a battle with breast cancer.

Olivia Newton-John died at the age of 73 at her home in California, her family announced in a post shared on her Instagram page on Monday. The beloved actress, perhaps best known for her role as Sandy in Grease, was “surrounded by her family and friends” when she passed, and her husband and daughter would have most certainly been there with her. As they’ve been by her side all along.

Her husband John Easterling paid tribute to his wife.

The Xanadu actress’ husband John Easterling wrote a beautiful tribute to his wife on her Instagram page on Monday after her death. “Dame Olivia Newton-John (73) passed away peacefully at her Ranch in Southern California this morning, surrounded by family and friends,” Easterling wrote. “We ask that everyone please respect the family’s privacy during this very difficult time. Olivia has been a symbol of triumphs and hope for over 30 years sharing her journey with breast cancer. Her healing inspiration and pioneering experience with plant medicine continues with the Olivia Newton-John Foundation Fund, dedicated to researching plant medicine and cancer.”

He went on to add that donations to the Olivia Newton-John Foundation be made in lieu of flowers.

She found the love of her life at 59.

Newton-John met natural health businessman Easterling in the early ‘90s, but the two didn’t start dating until 2005. She was married to actor Matt Lattanzi from 1884 to 1995, and the couple welcomed daughter Chloe in 1986. Newton-John was also in a long-term relationship Patrick McDermott until he mysteriously went missing in 2005. She and Easterling clearly clicked and eventually married in a private ceremony in Peru in 2008.

They married a second time that same year in Florida to include family and friends, and the actress was effusive in her joy at finding the “love of my life” in her late 50s. “I'm very lucky I have a wonderful, beautiful husband who is just so loving and fantastic,” she told People in 2016. I always tell my friends you're never too old to find love. I found the love of my life at 59 going on 60! I'm grateful."

Her daughter Chloe has followed in her mom’s footsteps.

Chloe Lattanzi is a musician and an actress just like her mom, even though she didn’t really have any concept of her mom being famous as a little girl. “As a kid, I wasn't paying attention to her as a celebrity. She's my mom, you know? Like, she takes me to school. I think as I've gotten older, that's when I got to listening to her music,” she told People in 2021.

After her mother’s death, Lattanzi shared several photos of her with her mom through the years. A tribute to their lifelong close relationship.

Newton-John was her daughter’s “lighthouse.”

In 2021, Lattanzi and Newton-John released their song “The Window In The Wall,” a beautiful duet that really highlighted both of their strong voices. After her mom’s death, Lattanzi shared the song with a message about their beautiful relationship: “You are my lighthouse mama. My safe place. My heart space. It has been my honor and continues to be my honor to be your baby and best friend. You are an angel on earth and everyone touched by you has been blessed. I love you forever my life giver, my teacher, my mama.”

Chloe has called her mom her “best friend.”

Lattanzi shared a photo of herself with Newton-John just days before she died from her own 2021 wedding to husband James Driskill. “I worship this woman. My mother. My best friend.”

What better tribute is there for a mother than that?

More Like This
Olivia Wilde Got Candid About Co-Parenting Jason Sudeikis & Life As A Single Mom
Alec & Hilaria Baldwin Welcome Baby #7, And Revealed Her Cheerful Name
Hilary Duff's Daughter Mae Is Every Toddler Obsessed With 'CoComelon'
Gabrielle Union Admits She May Be Becoming A Bit Of A Dance Mom With 3-Year-Old Kaavia

This article was originally published on Aug. 9, 2022