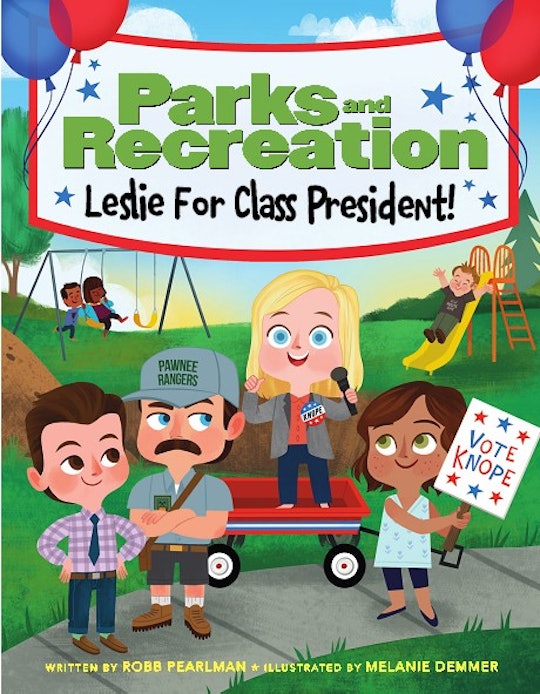 Leslie Knope wants to be class president, and you know you want to vote for her.

If you’ve ever dreamed of living in a world where your favorite TV characters could teach your kids all about voting and elections, the new children’s book Parks & Recreation: Leslie for Class President! is here to make all of your dreams come true. Leslie Knope is running for class president at Pawnee Elementary, and I personally have never wanted anything more than to be in 5th grade again so that I can vote for her.

Written by Robb Pearlman and illustrated by Melanie Demmer, the team behind another television fan-favorite and New York Times Bestseller The Office: A Day at Dunder Mifflin Elementary, this new children’s book promises tons of laughs and lots of fun for a whole new generation of Parks & Rec fans. On sale June 29 from Little, Brown Books for Young Leaders, Parks & Recreation: Leslie for Class President! explains important concepts like lobbying and bureaucracy, but with a Pawnee perspective that makes it fun and accessible for kids.

Knope stands for everything a good class president should — she wants to make the school a better place. She also believes that we all have the right to things like liberty, happiness, and of course, lots of waffles — because she knows what’s important in life.

Just like in an actual election, Knope and her friends must campaign to get the most votes so that she can win the race. (She’s great at making binders, and naturally, they’re filled with all of the reasons that her classmates should vote for her.)

During her run for class president, she’s got her friends by her side. As always, her best pal Ann is right there, fielding compliments and helping her BFF. As they campaign around the school, Knope encounters all of her friends — Chris, Tom, Andy, Jerry, Donna, April — the whole gang fans know and love from the show. Ben is there, too, but he’s a new student, so Ann and Donna have to explain all of their holidays to him because he doesn’t know anything about Treat Yo’ Self Day, Galentines Day, Haircut Day, or even Second Haircut Day.

While you read with your kids (or by yourself... I get it), there’s a list of icons and inside jokes from the show hidden throughout the book to find. Perhaps you’ll see Tammy 2 staked out behind some bushes, catch a glimpse of Li’l Sebastian trotting around, or even get the chance to dance to DJ Roomba. Plus, there’s plenty of callbacks to the show in the text that are sure to give parents a good chuckle or two.

The characters in the book are every bit as hilarious as they are on screen, and they’re teaching important lessons about campaigns, voting, and keeping promises. Like most politicians do, Knope makes a lot of promises to help her friends. Unfortunately, she realizes that she might not be able to keep them all. She doesn’t want to let anyone down, but Ron steps in with some wise words of wisdom on leadership to help her through her doubts. (Because deep down, we all know Ron Swanson is the actual best.)

In true Knope-style, things work out in the end, but you’ll have to read the book to find out exactly how it all goes down. You can pre-order Parks & Recreation: Leslie for Class President! online now and read it when it releases June 29. Go ahead — treat yo’ self.