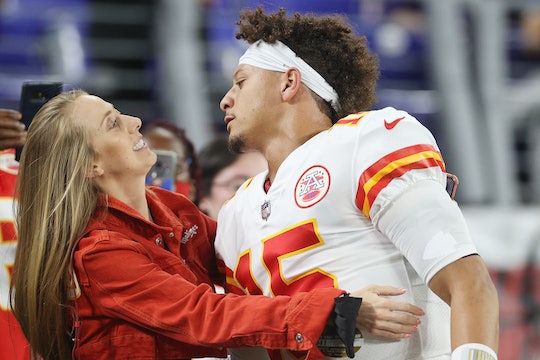 The 18-month-old was pretty in pink on the football field with her parents on Saturday.

When your dad is the quarterback of Kansas City Chiefs, chances are, you have some pretty cool NFL merch. Sterling Skye is only 18 months old, but she showed her support for her dad on Saturday by dressing in a precious pink Chiefs t-shirt. Her mom, Brittany Matthews, who is currently pregnant with Sterling’s baby brother, posted family pictures from Texas Tech University. With a huge smile, Mahomes is holding little Sterling, who is clad in pink with a matching bow on her head.

In the second photo, you can see Matthews’ baby bump in her Chiefs-red dress. Mahomes is sporting a white t-shirt and black pants as he smiles from Jones AT&T Stadium in Lubbock, Texas. The last photo in the carousel is a close-up of Sterling in her t-shirt with the number “15” to support her dad. She’s also holding a little Texas Tech ball. In the picture, you can see the toddler’s pretty blue eyes and blonde curls as she makes a “Guns Up” finger sign and looks out on the football field. This cutest fan is definitely a daddy’s girl!

Texas Tech announced on Aug. 20 that Mahomes was selected as the eighth member of the prestigious Texas Tech Ring of Honor and Hall of Fame. He will be officially inducted on this October and his name will be unveiled on the West Stadium Building of Jones AT&T Stadium. The university shared pictures from the event on Twitter, writing, “A moment we will never forget. Congratulations, @PatrickMahomes — and thank you for all you’ve done for Texas Tech.” You can peek Sterling’s cute shirt in one of these as well.

"When you look at the face of the NFL, that is Patrick Mahomes," Kirby Hocutt, Texas Tech Director of Athletics, said in a press release. "Patrick's accomplishments at Texas Tech are well documented with his success as one of the top quarterbacks in college football history. Patrick is an NFL MVP and a Super Bowl champion, but he's, most importantly, a Red Raider who remains an avid supporter of our great university. We are excited to welcome home Patrick and his family later this fall to see his name formally honored inside Jones AT&T Stadium."

After Mahomes graduated from Texas Tech, where he received Big 12 Scholar-Athlete of the Year and Academic All-America recognition, he was selected by the Kansas City Chiefs in the 2017 NFL Draft, leading the team to two Super Bowls and two AFC Championship game appearances. He was also named the youngest player in history to be named an NFL MVP and win a Super Bowl with the Chiefs against the San Francisco 49ers in February 2020.

Mahones tweeted a video from the Aug. 20 event along with his appreciation for the recognition. “Wow man… can’t even explain how appreciative I am,” he wrote. “Texas Tech has done so much to make me who I am today. I’m honored to be apart of this great University for life! @TexasTech.”

Now they just need to get a matching Chiefs onesie for their baby boy!