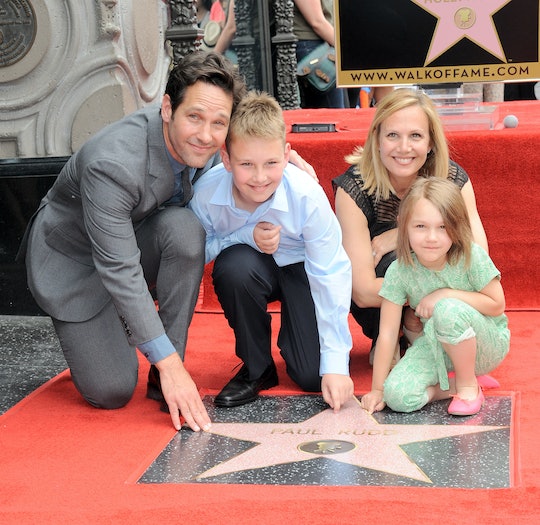 There’s a very small number of celebrities in this world who manage to be popular with everyone and Paul Rudd is one of them. What is it about him that is so appealing, so likable? It’s not just his hilarious movie roles over the years. I would argue it’s Rudd’s devotion to his wife and kids that truly make him the “Sexiest Man Alive.”

Rudd claimed the honor of being named People’s Sexiest Man Alive in 2021, and he accepted the title with more than a little dose of his trademark self-effacing humor. “I do have an awareness, enough to know that when people hear that I'd be picked for this, they would say, 'What?’” the actor told People. “This is not false humility. There are so many people that should get this before me.”

The Clueless actor’s humility comes from the way he sees himself. “When I think about myself, I think of myself as a husband and a father, like I'm that,” he told the magazine. “I just hang out with my family when I'm not working. That's what I kind of like the most.” But who are these special people in Rudd’s life? Here’s a look at what the actor has shared about his wife and kids over the years.

Rudd has been married to wife Julie Yaeger since 2003, but they first started dating in 1995. Yaeger was working in his New York publicist’s office at the time, and they hit it off — especially when she offered to take his luggage to store at a friend’s so he could make his audition, according to Good Housekeeping. They’ve been together ever since, even working together on the 2017 movie Fun Mom Dinner, which Yaeger, a screenwriter, wrote. The couple’s marriage has also been the source of inspiration behind some of Judd Apatow’s work in This Is 40 and Knocked Up, when the director asked them to record their conversations to get a sense of how they communicated.

Yaeger’s reaction to her husband’s new title? “She was stupefied. But you know she was very sweet about it. After some giggling and shock, she said 'Oh, they got it right.' And that was very sweet. She was probably not telling the truth, but what's she going to say?” he told People.

Their Son Jack Is 17

Rudd and Yaeger’s son, Jack Sullivan Rudd, is now 17 years old, and apparently doesn’t mind giving his dad a hard time. “When I told my son that I was going to be in a superhero movie, he asked what it was,” Rudd told HuffPost in 2017. “I said, ‘We’ll I’ll be playing Ant-Man.’ He said, ‘What?’ He was not that impressed ... What he actually said was ‘wow I can’t wait to see how stupid that’ll be.’”

Since then, father and son bonded over their love of football at the 2020 Super Bowl in Miami.

Their Daughter Darby Is 12

Rudd’s 12-year-old daughter Darby served as the inspiration for the father-daughter relationship in his movie Ant-Man. “When my daughter is old enough, and she sees this movie, that she’s going to see me playing dad to a little girl. And instead, it’s the opposite. I think she really loves it,” he told Jamonkey in 2018. “Because I tell her, ‘you know, you’re the real Cassie’ ― and I do little things in the movie that are little things for her.”

Paul Rudd might keep his family out of the spotlight, but he is clearly always thinking of them. And this is exactly what makes him so attractive.