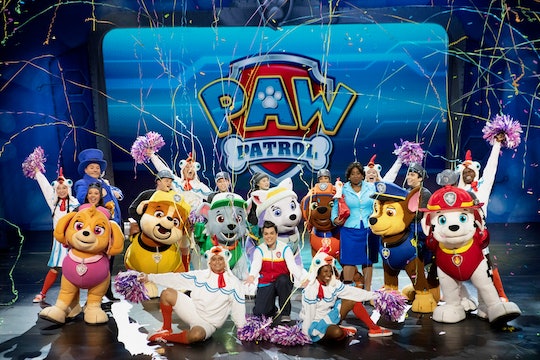 Chase, Marshall, Rubble, and the rest of the PAW Patrol gang are set to put on a live performance. And, best of all, you and your kids don’t even have to leave your house to see it. A virtual event called PAW Patrol Live! At Home will be available to stream later this month.

If your family missed out on seeing PAW Patrol Live! on tour when a show came to a venue near you pre-pandemic, you’re in luck. PAW Patrol Live! At Home is bringing the hit live stage show into homes for one weekend only — and here is everything you need to know.

PAW Patrol Live! At Home Is An Interactive Show

A ticket to this “virtual extravaganza” will include a broadcast of the stage production, which runs about 45 minutes, but will also put the kids at the center of the action. Kids will have the opportunity to watch PAW Patrol Live! At Home in a shared viewing room with friends and family, in addition to taking part in a pre-show with games, videos, and printable activities.

Families watching at home will be able to pick a pup and customize their viewing experience, as well as design their own interactive Cheer Squad avatar for the show, which will respond to viewer participation through motion and sound capture.

You Need A Ticket To Watch

You can buy a ticket to PAW Patrol Live! At Home to all six showtimes, which will be broadcast on Saturday, April 24 or Sunday, April 25. A single ticket, which costs $15, allows families to watch it on one single device and get all of the perks of attending the interactive show. A group ticket, which costs $50, gives the buyer three access codes that they can share with their friends and family members and watch the show in a shared viewing room, or it gives them the ability to watch the show on three different devices in their home. You can purchase tickets directly on PAW Patrol Live! At Home’s website.

You Can Stream PAW Patrol Live! At Home

Once you have your ticket you will be able to tune in and watch the show on the PAW Patrol Live! At Home website during any (or all) of the six showtimes on April 25 or April 26. But families will want to tune in an hour early to participate in all of the fun pre-show festivities and to make sure the live stream works, the event’s website recommends. And if you miss any of the showtimes, don’t worry! You can rewatch the show as much as you’d like for one whole week after it airs.

PAW Patrol Live! At Home will take kids to the day of the Great Race between Adventure Bay’s Mayor Goodway and Foggy Bottom’s Mayor Humdinger. But when Mayor Goodway is nowhere to be found, it’s up to Ryder and the rescue pups to find Mayor Goodway and help her finish the race. As the saying goes, “no job is too big, no pup is too small!”