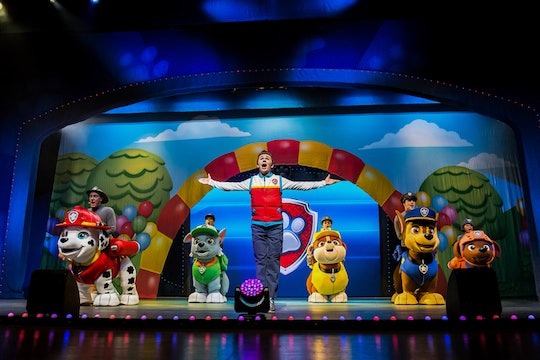 One thing I never thought I would be doing is sitting in a theater full of small children watching people dressed as dogs perform live. But, when I found out PAW Patrol Live was coming to town, I knew that there was no way I could pass up the opportunity to treat my nephew to the experience. At 2 years old, this would be Greyson’s first live performance of… well, anything, and I could already smell the fresh engraving on my “Best Auntie Ever” trophy. An exciting afternoon with my adorable nephew was had, but I learned that there are definitely some things to know before seeing PAW Patrol Live with your family.

Before I dive into the specifics, I do have to share that I actually had a really, really good time at PAW Patrol Live. For starters, I was buzzing with excitement to watch my nephew have this experience. I couldn't imagine what a 2-year-old would even think of a show like this, but I knew that he loves PAW Patrol almost as much as I love him so it was worth the risk. Seeing his adorable little face light up with pure joy when the music began and the characters first ascended onto the stage was something that literally brought tears to my eyes. And you know what? I actually enjoyed the show, too, and I'm not ashamed to admit it.

Bring A Booster Seat For Your Little Ones

This one is very, very important. It wasn’t until we were being seated for PAW Patrol Live when we found out that the theater had run out of booster seats. At the time the place was barely half full, and it dawned on me (and both Greyson’s mom and grandmother) how unlikely it is that any venue would have enough boosters to fill the majority of their seats. Because of this, Greyson ended up sitting on top of his own diaper bag. Thankfully it was both sturdy and high enough, but a secured booster seat would have been more ideal.

A Few Toys For Intermission Would Be Helpful

To be honest, we weren’t sure if PAW Patrol Live would have an intermission or not. Thankfully, there was one! Not only did we have time to visit the potty, but there was plenty of time for my nephew to get bored. I probably wouldn’t have thought to pack something to play with, but Greyson’s mom did and that helped keep chaos that boredom brings from erupting in our row. Other rows filled with children ages 5 and under… were not so lucky.

Pack Some Snacks For Everyone — Not Just The Kids

Packing snacks for the little ones is pretty much a no-brainer, but in this case you’ll want to expand on that. PAW Patrol Live is not necessarily a long show, but if watching Chase, Marshall, Rocky, Rubble, Sky, and Zuma save the day in Adventure Bay isn’t exactly your preferred form of entertainment, some popcorn to pass the time won’t hurt. Also, you can never really rely on a performance venue to have quality snacks… or a chocolate bar that won’t cost you an entire hand.

Splurge For The VIP Meet & Greet If You Can

If you really want to blow your kids minds, buy the VIP Experience package. I didn't and I deeply regret it. The package includes an after party where guests actually get to meet some of the PAW Patrol characters face-to-face. According to the website, the party lasts about 40 minutes and there are plenty of activities, photo ops, and swag.

Warning: The Flashy Toys Are Hard To Hide From

Chances are you know what it’s like to walk into a store with a toddler, only to later struggle with trying to walk back out without a handful of toys (or things that look like toys). Sorry to be the bearer of bad news, but you will have this problem at PAW Patrol Live if you aren’t careful. There are merchandise tables set up throughout the venue, especially within the lobby before entering the theater. There are stuffed animals, action figures, backpacks, balls, light up wands — you name it, they have it. Keeping your kids distracted with their own toys, a snack, or whatever secret tricks you have up your sleeve will help you leave PAW Patrol Live without $50 of toys and memorabilia your family doesn’t need to bring home. (Example: The $25 light up wand I bought for my nephew is currently collecting dust in the laundry room.)

Encourage Your Kids To Participate

Last but certainly not least, taking your kids to see PAW Patrol Live is all about having fun. When it’s sing-a-long time, or Marshall is asking the crowd to chant so he can finish a task and save the day, encourage your kids to join in! I noticed lots of kids, including my own nephew, were a little overwhelmed by the idea of yelling out in a room full of strangers — but once they realized it was part of the fun, it was hard to get them to stop! So, take my advice: sing, dance, clap, and cheer as the PAW Patrol helps out the good people of Adventure Bay right before you and your little one’s very eyes. Not only will it be fun, it will create lasting memories for everyone involved!