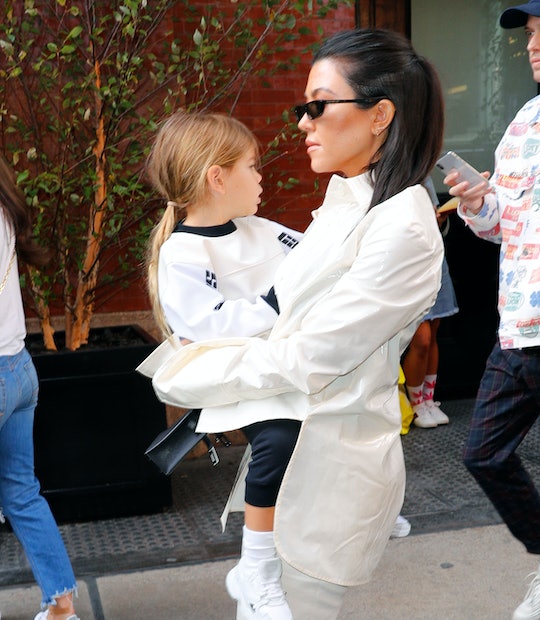 It seems nearly impossible for a celebrity to post anything on social media these days without garnering at least a few offensive comments, especially if that celebrity is a member of the Kardashian family. While most of these petty "scandals" are pretty easy to shrug off, the latest one really crosses a line. People are asking if Reign Disick is a boy or a girl on his aunt Khloé's recent Instagram post, and it's incredibly rude, to be honest.

The faux confusion seems to stem from the fact that Reign, who as far as we know identifies as a boy, has long hair. Because, of course, nobody with a Y chromosome has ever grown their hair below their earlobes, other than Bob Marley, Sam Elliott, Jason Momoa, Ted Nugent, Kenny G, Antonio Banderas, Naveen Andrews, Trace Adkins, Thor, or Jesus. Am I forgetting anybody? Millions of other dudes, you say? Huh. Then I can't imagine what all the fuss is about. Sure, it's more common for men and boys to choose shorter styles, but there are no hard and fast rules related to gender and hair length. Nobody comments of photos of Kris Jenner asking if she's a boy, do they?

Still, Kourtney Kardashian (Reign's mother) has been receiving outrage about Reign's hair for years. In 2016, The Hollywood Gossip asked why she hadn't "simply gotten Reign a haircut, considering he appears to need it badly," even going so far as to question if the toddler's ponytail was somehow a statement of his mother's "subtle support for the LGBT community." In 2017, a Daily Mail article about Reign's "cute man bun" (as opposed to a woman bun?) received a comment claiming Kourtney "feminizes her son" and "wanted him to be a girl."

The concern trolls on Khloé's recent post are once again demanding that a complete stranger change the way her child looks to suit their whims. One claims that they "always get confused" about Reign's gender because of his hair length, while another wants his hair cut "so he's not made fun of." Here's a crazy idea, how about we just stop picking on children's looks, instead? Then there are the scores of comments asking, "Boy or girl?" despite the fact that there are plenty of comments already posted referring to Reign as "he" or "him," and many incredibly patient people specifically explaining that he's a boy.

Worse still are the commenters feigning innocent curiosity about the child's gender as if it's some sort of unsolvable riddle. "I never knew if this child was a boy or girl," one person wrote. "I always wondered." Another pleaded, "can someone tell me is that a girl or boy i been wondering for a year now," and dozens more complained that they're "so confused." They're not fooling anybody. If they care enough about the Kardashians to comment on their Instagram posts, it's highly unlikely that they've never seen one reference to his gender. Even if that were true, if they have access to Instagram, they also have access to Wikipedia, Google, or any number of other resources that could clear up this so-called mystery.

And those aren't even the most monstrous comments, like the ones claiming that Reign "lives as a girl," is "secretly a girl," or even more transphobic slurs that I refuse to copy and paste here. Speculating on the gender identity of a 3-year-old is beyond repugnant, whether that child identifies as cisgender, transgender, or non-binary. Who knows if Reign has even considered the concept of gender? And who cares? Unless you're evaluating a potential sex partner, or you're a medical professional treating a patient, you do not need to know anybody else's gender. Reign's gender, and his hair, are nobody's business until he's an adult and specifically invites public comment on them (which I certainly hope he never does). If a child's gender expression or identity troubles you, you're the one with the problem, and Instagram comments are not the place to address it.