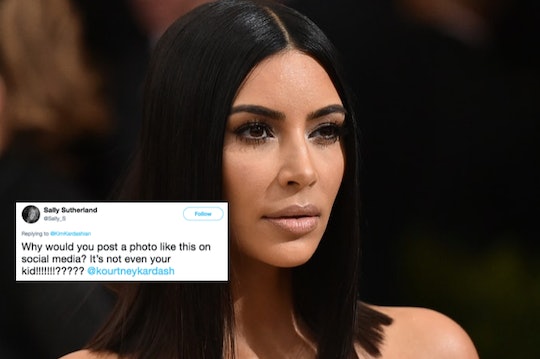 If there are two things the Kardashian family is best at, it's taking pictures and sticking close to family. But sometimes that gets them in trouble. Most recently, people are slamming Kim Kardashian for a shirtless picture of Reign, her sister Kourtney's youngest son. The picture is part of a series Kim has been posting for the 25 days of Christmas. The photos were taken by Eli Russell Linnetz, as she shared on Instagram, and so far each one features a Kardashian baby on a white set, wearing blue jeans, looking classic AF. It's really going to make a great Christmas card.

The first one featured her own son, Saint, going through a stack of boxes, presumably Christmas presents, with his shirt off and a pair of jeans. The second was her daughter, North, in a ribbed white tank and jeans, looking up at a woman, presumably Kim (the photo cuts off before it hits the person's neck). The third features Kourtney's son, Reign, close-up, with his long hair loose, in jeans, with his shirt off.

The picture of Saint with his shirt off features the baby way off in the distance, so maybe that's why people weren't flipping out over it. In this picture, though, Reign is front and center. Also, many who don't keep up with the family might have missed the memo that Kourtney likes to keep her babies' hair long, almost like a "girl," which for some people makes the photo more egregious. For all of these alleged reasons and likely more, people are losing their minds over the picture.

Here's The Series So Far

And The "Offensive" Photo Of Reign

These photos are beautifully done, and likely make up one great, huge portrait of the family. Collecting professional family portraits is something the KarJenners just do. Remember how momager Kris Jenner used to keep a photo of naked pregnant Kourtney in her room? Or her never-ending hallway of pics of her daughters in her Calabasas home and office? One of the major ways some paparazzi think they've confirmed Kylie Jenner and Khloé Kardashian's rumored pregnancies is that they were allegedly spotted on their way to a pregnancy photo shoot, according to Us Weekly.

This is all to say, when you're the Kardashian and Jenner sisters, you get amazingly artistic photos taken of you and your family all the time. So it's pretty safe to assume that Kourtney knows about this image of her son and likely approved of Kim posting it on social media. Her kids have been running around in their diapers on KUTWK since they were born (literally, Kourtney's been filmed actually pulling them out of her body) and she often posts pics of her kids, too.

Yet, people are losing their minds for a number of reasons. For one, they think it's wrong of Kim to post a pic that's not of her child. Others think she's sexualizing Reign, while even more people acknowledge that it's just "predators" out there who might sexualize the picture. Then, oddly, some people are telling others to not worry about the topless pic simply because it's a boy, as if young boys can't or won't be sexualized, when that's just not true.

People Were Worried About The Crazies & The Sickos

Others Accused Her Of Exploiting Reign

Other People Were Just Mean AF

But, Other Fans Did Have Her Back

People are right — there are gross, terrible, people in the world. But it's up to every parent to decide whether or not they want to share pictures of their kids on social media. If Kourtney and Kim want to share pictures of their toddlers in their birthday suits, celebrating them, they can and should. There should be nothing sexual about a kid laughing on a Christmas card, or kissing his mom, or seriously, doing anything.

What's more troublesome are the people who claim that it's NBD because he's a boy and not because people shouldn't sexualize kids. Others took more issue with the picture because they assumed it was of a little girl (because of their ideas about gendered haircuts), though they had no problem with the similar picture of Saint with his shirt off.

That, in the famous words of Joe Biden, is malarkey. And very sexist. All bodies deserve to be celebrated and protected and the Kardashian women obviously know what they're doing by posting images of their children.

If anyone thinks there's something sexual with that picture, it says more about them than the KarJenner family. Let baby Reign live.