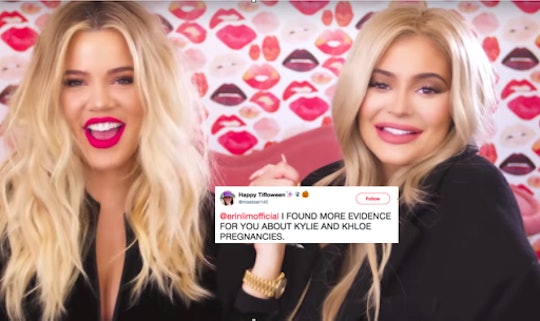 And now, for the moment everyone who's been trying to keep up with all those Kardashian... pregnancies has been waiting for. Well, kind of. In a new video touting their collaboration for a new lip kit, Kylie Jenner and Khloé Kardashian joked about having "so many babies." It's an obvious allusion to the pervasive-yet-unconfirmed rumors that both of these famous sisters are expecting their first babies sometime next year. And it's definitely enough to get fans to sit up even straighter and pay even more attention. But it's not exactly the confirmation that the Kardashian empire is growing that so many are just dying to hear.

And, oh man, it's obvious that Khloe and Kylie knew exactly what they were doing when they dropped that tantalizing non-admission. It was such a deliberate tease, the most diehard of fans may not recover from reading the headlines their comments generated until after both alleged babies-to-be are born and assume their rightful places in the Kardashian reality TV universe and fame factory.

But let's back up. It all started Tuesday when a video starring the sisters (and rumored moms-to-be) went live on YouTube. Its purpose is to generate some buzz for the In Love with the Koko Kollection, which they partnered to produce under Jenner's cosmetic line.

But the subliminal message that soon emerged was far from subtle, and it's the aspect of the video that's going to be the reason is goes viral, even by Kardashian standards. Toward the end of the video, the 33-year-old Khloé referred to the makeup (three different shades of matte liquid lipstick and one nude gloss, according to People magazine) using the choicest of analogies. "We created them," she says. "It's our baby together, we have eight!"

And Kylie is totally on board with the tease, as well. "We have so many babies, who knew?” she answers, and they both laugh. Because they know. They know what they're doing to the legions of fans who just need to learn the truth once and for all.

And, honestly, it does seem as though this very effective publicity stunt does take fans just that much closer to knowing for sure that the rumors could very well be true. Last month, reports surfaced that 20-year-old Kylie is reportedly expecting a baby with her boyfriend, rapper Travis Scott. Not long afterward, the Kardashian rumor mill starting churning again, this time with the news (buoyed, like the Jenner news, by anonymous sources) that Khloé and her boyfriend, Cleveland Cavaliers star Tristan Thompson, would soon reportedly welcome their first child as well.

Even though Kylie and Khloe didn't come right out and reveal their reported pregnancies in the video, the "so many babies" comment is still spot-on in the Kardashian realm. Their sister Kim Kardashian — already the mother of two — recently confirmed that she and husband Kanye West are expecting again, this time most likely via surrogate. The sisters are also aunts to their brother Rob's daughter, Dream, who is just about to celebrate her first birthday in November.

On the other hand, we now know which Kardashian is definitely not pregnant, at least for the time being: Oldest sister Kourtney dismissed rumors that she's expecting for what would be the fourth time on Twitter Tuesday.

Kylie and Khloé, however, have done no such denying. In fact, their most recent jokes about the whole situation certainly make it seem like there's absolutely something going on here. And at this point, if the rumors don't turn out to be true, there are going to be some very disappointed Kardashian/Jenner fans out there. It's becoming more and more likely, though, that that probably won't end up being the case.