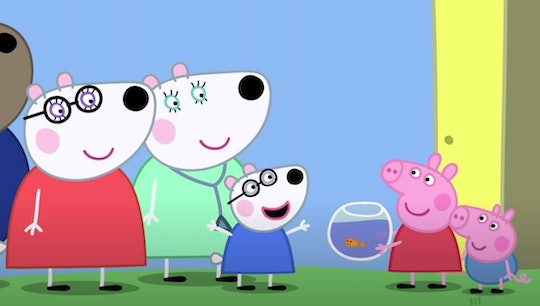 Penny’s mums are the first same-sex couple in the show’s 18-year run.

Peppa Pig first aired in the UK in 2004. A year later, it came to the United States and has been charming preschoolers (and inspiring them to speak with an English accent) ever since. But in all that time there’s something we’ve never seen on Peppa: a same-sex couple. That changed on Sept. 6, when the episode Families aired in the UK. Well, sort of. Here’s what happened.

In a scene were the children in Peppa’s class are talking about their families, Penny Polar Bear draws a picture of her family — two adult polar bears in dresses. She explains that she lives with her mummy and her other mummy. “One mommy is a doctor,” she elaborates, “and one mommy cooks spaghetti. I love spaghetti.”

So... we don’t actually see a couple. We see a depiction and hear tell of one, which is the kind of minimal representation we’re used to from children’s shows, but anything is an improvement on nothing so we’ll count this as a win for the LGBTQ+ communities. And it’s also sort of nice that having two moms is mentioned as casually as the fact that Penny loves spaghetti.

The scene comes after 18 years, seven seasons, and more than 250 episodes, as well as a petition to include same-sex parents with nearly 24,000 signatures. “Children watching Peppa Pig are at an impressionable age,” the reads, “and excluding same-sex families will teach them that only families with either a single parent or two parents of different sexes are normal. This means that children of same-sex parents may feel alienated by Peppa Pig, and that other children may be more likely to bully them, simply through ignorance. Peppa Pig is not just for entertainment, children are inevitably learning from it too.”

Funnily enough, in the weirder corners of the internet, Peppa has become somewhat of a queer icon... but in an ironic, silly meme-y way: like how the Babadook (from the horror movie of the same name) also became cheeky, LGBTQ+ meme. (Peppa’s ascension to the echelons of LGBTQ+ royalty, is a little more adult than the Babadook’s... the song “Expert Daddy Pig” from Peppa Pig: My First Album has some... alternative connotations in certain communities, let’s just leave it at that...).

Peppa has become a childhood icon in all corners of the actual world. She and her friends can be seen on TV in 180 countries. Peppa-themed play areas can be found in the UK, China, and the Netherlands, as well as in Texas, Michigan, and Chicago. There’s even a Peppa Pig Theme Park in Florida (right next to Florida’s Legoland). Hopefully, this glimmer of more representation can meaningfully effect the millions of kids who love the show.