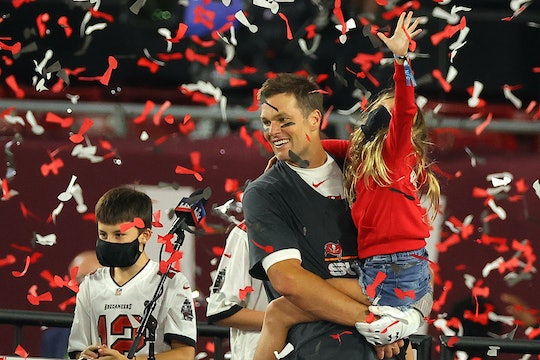 Jack, Benjamin, and Vivian were so excited.

Whether you were rooting for the Tampa Bay Buccaneers or not, you have to admit these photos of Tom Brady with his kids after his 2021 Super Bowl win on Sunday night are worthy of a trophy. After helping lead his team to victory, the Buccaneers defeated the Kansas City Chiefs in Super Bowl LV, making Brady a seven-time Super Bowl champion and his three children pretty darn proud.

Following the win, Brady took to the podium, where he was joined by his three kids, 13-year-old son, Jack, whom he shares with his ex Bridget Moynahan as well as 11-year-old son, Benjamin and 8-year-old daughter Vivian with wife Gisele Bündchen. During the post-game moment, Brady marveled at how he gets to enjoy his victory with his kids. "They started off about this big, and now look at 'em," Brady told reporters, according to E! News. "So I'm trying to stop the clock right now, but it'll be nice to celebrate with them, too."

And that's exactly what they did. Brady showered his wife and kids with hugs and kisses while they stood on top of red and white colored confetti. Prior to joining their dad on the field, Bündchen showed their kids cheering for their dad on her Instagram Story. But they are quite familiar with victory; by the time Jack was born in August 2007, Brady had already won three Super Bowls with the New England Patriots. Since then, he has gone on to win four more titles and here's a look at how the Brady crew celebrated his most recent victory.

Even Vivian Got To Hold The Coveted Trophy

Needless to say, the Brady family was probably still celebrating over breakfast on Monday morning.