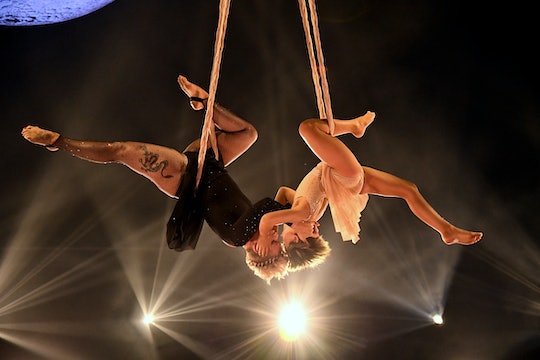 Pink and her daughter Willow were mother-daughter magic on Sunday night during the Billboard Music Awards. The duo performed a beautiful, gravity-defying acrobatic performance to Pink's "Cover Me in Sunshine,” the hit single the pop star recorded with her 9-year-old daughter earlier this year.

The pair twinned in their matching blonde mohawk haircuts. The “Get the Party Started” singer wore a shimmery, black leotard, while Willow donned a glittery leotard with a sheer ballerina skirt. Together they performed a series of acrobatic stunts in the air that left the audience in awe.

During a pre-show interview, Pink teased the performance, telling E! News: “The first part of the performance will possibly be my favorite thing I've ever done.” And it turned out to also be her fans’ favorite as well. Social media dotted over the emotional mother-daughter aerial performance. “Look at that smile. I seriously can’t get over this performance. My jaw hit the floor and then I was in tears lol. Such a Beautiful mother-daughter moment,” one viewer tweeted.

Sunday was ultimately a big night for Pink, who shares Willow Sage Hart, 9, and her son Jameson Moon Hart, 4, with her husband, Carey Hart. The Grammy-award winning artist became the 10th musician to receive the Billboard Icon Award. During her acceptance speech, she gave kudos to her kids, who both accompanied their mother on the red carpet.

“Willow nailed it. Jameson, nailing it," she said. "I love what I do and I love the people that I get to do it with.”

Sunday night’s performance was not the first time Willow has done a collab with her pop superstar mother. Back in 2018, the two recorded a reprise of “A Million Dreams” from the album, The Greatest Showman: Reimagined, which also featured other artists such as Kelly Clarkson, Craig David, and Kesha.

Also, the 9-year-old is not new in the aerial game. In 2019, the then 7-year-old was crushing aerial stunts. Her dad took a video of her practicing at the Centre Bell in Montréal, hashtagging it #PurpleHairDontCare on Instagram. “Willz taking mama @pink job,” he captioned the video.