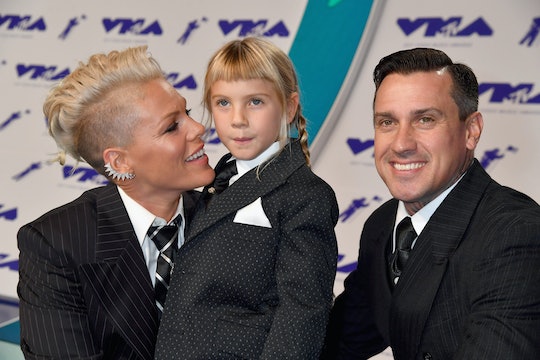 She stole the show with her Christmas duet

Talent seriously runs in this family, as evidenced by ABC's Disney Holiday Singalong. On Monday night, Pink's daughter Willow revealed her singing voice while belting out to a Christmas song with her mom and shocked the internet with her supersized talent.

The "Beautiful Trauma" singer joined an all-star cast to ring in the holiday season on Monday night for the Disney Holiday Singalong hosted by Ryan Seacrest, with performances from Katy Perry, BTS, Michael Bublé, Ciara, Chloe x Halle, and opera singer Andrea Bocelli singing classic Christmas songs with the lyrics onscreen so fans at home could sing along.

The show featured a whole lot of familiar classic songs like "Joy to The World" sung by Kerry Washington and "Have Yourself A Merry Little Christmas" by Adam Lambert. And when it was time for Pink to sing her carol of choice, she stood by a fire wearing a spectacular copper dress and sang "The Christmas Song (Chestnuts Roasting On An Open Fire)." But she didn't sing it alone.

Her 9-year-old daughter Willow, whom she shares with husband Carey Hart, stood beside her mom wearing a sweet little Disney Princess dress and a big grin. She swayed along to her mom singing, and then all of the sudden Pink hands her the microphone. The little girl, barely missing a beat, sang "they know that Santa's on his way. He's loaded lots of toys and goodies on his sleigh."

Her voice was... astounding. She really delivered the goods, much like the aforementioned Santa.

Pink's daughter Willow shocked the internet with her singing voice.

The internet was in shock after hearing the confident little girl really take that Christmas carol on home (and Pink truly could not look more proud if she tried). When ABC shared a short clip of Pink singing with Willow, social media users left messages like, "The Best!!! And willow already has a great voice like mama!!!!" and "WOW! Pink you're my all-time favorite singer BUT! Willow just might place you in second now. Wow....just wow!"

Pink fans will remember that Willow has sung with her mother before, of course. Back in 2018 Willow joined her mother to sing "A Million Dreams" forThe Greatest Showman soundtrack, and even at 7 years old was already showing impressive vocal skills.