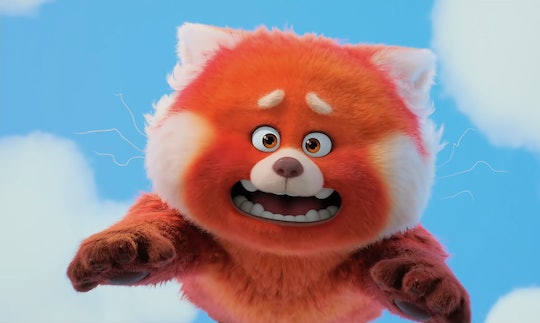 Eagle-eyed viewers noticed something in the new teaser trailer that has families with diabetes excited.

It’s always a fun day when a new Pixar trailer drops. Fans look forward to getting a sneak peek at a movie they know is going to make them cry in a few months. (Be honest: have you ever seen a Pixar movie that didn’t make you cry?) But in addition to the brilliant animation and creative premise we’ve come to expect from the animation company, the new Turning Red trailer features a character with diabetes... though many viewers probably didn’t notice.

Directed by Domee Shi, who won an Oscar for the Pixar short Bao, Turning Red is a coming of age story about Mei Lee, a dorky but confident 13 year old, torn between her desire for independence and remaining a dutiful daughter to her over-involved mother. But what makes Mei different than any teen is that whenever she is excited or stressed she turns into a giant red panda!

It’s hard to notice much of anything else when there’s a child turning into an adorable red panda right in front of you, but some eagle-eyed viewers noticed something 34 seconds into the trailer – an unnamed character sporting what appears to be a continuous glucose monitor, often known as a CGM, on their arm, just below the sleeve of their t-shirt.

A CGM is a medical device that constantly monitors blood glucose on folks with diabetes. The tiny sensor inserted just under the surface of one’s skin takes regular readings every few minutes, which allows wearers to not only have constant data on their health, but can warn them if glucose levels rise too high or drop too low, ideally avoiding dangerous circumstances.

A few seconds later, in a “blink and you’ll miss it” moment, a purple insulin pump can also be seen on the character’s hip.

An insulin pump is a small, computerize device that works much like a human pancreas, delivering small doses of insulin continuously through the day (and a bit extra after mealtimes, when your body needs more) through a tube under your skin. The pump, which is about the size of a smart phone, is generally worn attached to clothing and connected to the infusion site on the body under the skin (usually belly or butt) with a thin plastic tube.

Since this is just a teaser trailer, details are scant, on the character, on the exact nature of the device they’re wearing, or even on the extent diabetes will play a role in this film. Nevertheless, seeing diabetes technology on the big screen (however briefly) is something that means a lot to some members of the diabetic community.

Kelsey Bascom a diabetes advocate and sponsored spokesperson for Omnipod, a tubeless insulin pump she herself uses, told Romper that Pixar’s decision to include this detail is a valuable opportunity to start conversations. “I was diagnosed with Type 1 diabetes at age 17, and it’s not often you see diabetes and diabetes technology truly represented in a cultural moment like this,” she said in a statement. “I know I was excited seeing diabetes represented in the trailer and I wear my own “robot parts” proudly. When others see it on my body, we can have a discussion and I can educate them about it. I hope a moment like this will do the same!”

Many viewers on social media agree.

“A great example for our little ones with diabetes,” Twitter user @MARC_intosh agrees.

Turning Red will come to theaters in Spring 2022, and we’re excited to learn more about the movie, and this intriguing character, as details emerge.

Editor's Note: This article has been updated to include a quote from Kelsey Bascom.

More Like This
Brandy Will Play Cinderella Again In The Disney+ Movie The Pocketwatch
Caillou's Mom Saves The Day In Peacock's Brand New Christmas Special
Here’s How To Watch 'A Charlie Brown Christmas' This Holiday Season
Exclusive: 'Firebuds' Dives Into Hanukkah Traditions In Festive New Episode