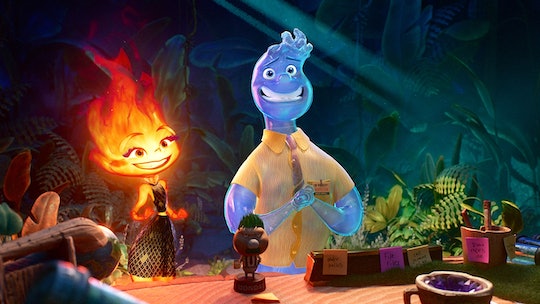 “This movie is about thanking your parents and understanding their sacrifices.”

This summer, the natural elements will collide in Pixar’s newest movie, Elemental. Fire, water, land, and air are living together in a futuristic city, and learn that they have more in common than they thought.

What is Elemental about?

According to the story synopsis, the story is “set in Element City, where fire-, water-, land- and air residents live together.” The narrative focuses on Ember, “a tough, quick-witted and fiery young woman,” whose friend Wade, “ a fun, sappy, go-with-the-flow guy,” challenges her beliefs about the world they live in.

Director Peter Sohn, who was also the voice of Sox in Pixar’s Lightyear, told The Hollywood Reporter he has been working on the concept for the past seven years.

“I am quite emotional about getting the characters and the story out for sure,” Sohn told THR in a November interview. “This movie is about thanking your parents and understanding their sacrifices. My parents both passed away during the making of this thing. And so, it is hugely emotional, and I’m still processing a lot of it. But at the same time, there’s so much amazing work that the team has done that I’m quite proud of what they’ve accomplished.”

The movie will star Leah Lewis and Mamoudou Athie as Ember and Wade. The trailer for the movie premiered last month.

“There was a practical part of just trying to set the world up in terms of our]four elements — there’s earth, air, water and fire,” Sohn told THR. “And so when you walk into the train, you get a glimpse of the types of cultures that we’ll be able to play with.”

The movie was inspired by Sohn’s parents.

During an interview with Collider, Sohn shared how his parents, who emigrated from Korea, provided the foundation of Elemental, describing them as a “driver” and “North Star” in the action and mood of the movie.

“[It’s about] thanking our parents and just hitting these themes of a culture clash,” he told Collider in November. “But it’s not an autobiography, so there is a way to disconnect from it. Obviously, I’m not an element, but some of the themes come from a real place.”

He added, “Something about these themes is just very universal, so that’s been great fuel to make this, but at the same time, it is vulnerable. I can’t lie, it’s a vulnerable act to just go, ‘Oh, right, these are some of the issues that I had with my parents and with trying to fit into a country that I was born in.’”

Sohn was also inspired by his love life.

Sohn, who is Korean, told AsiaOne that his family wanted to marry a Korean woman but he did not.

“They're hardcore,” he explained. “My grandmother's dying words were literally like, 'Marry Korean'. And she literally passed away after, like I was with our families hearing this."

He added, “Once he met her and understood who she was, my dad had this empathy that totally opened the door. You know, my mom had a little bit longer of a time to turn, but I think that empathy was the key.”

When will Elemental be released?

More Like This
Pixar’s 'Turning Red' Is Nominated For An Oscar — Here’s How To Watch It Right Now
Marcel The Shell Is Heading To The Oscars!
Marcel The Shell Is Officially An Oscar-Nominated Movie Star
Princess Tiana’s Dream Restaurant Is Becoming A Reality At Disneyland
What Parents Are Talking About — Delivered Straight To Your Inbox