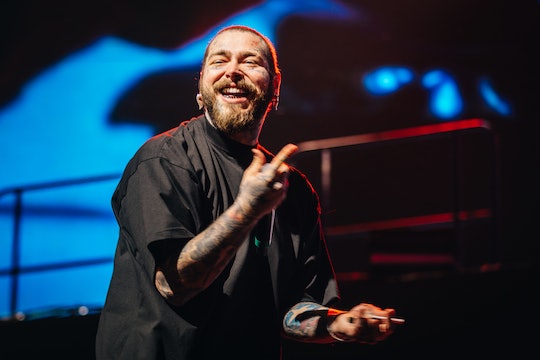 Post Malone Reveals He’s Going To Be A Dad

“Time to take care of my body and my family and friends.”

This announcement definitely has Post Malone feeling like a rockstar! The 26-year-old “Better Now” rapper revealed this week that he’s going to be a dad for the first time and is expecting a baby with his longtime girlfriend.

Post Malone, whose real name is Austin Post, told TMZ on Tuesday that he is expecting his first child with his girlfriend, whose identity has not been revealed publicly, and is excited for fatherhood. “I’m excited for this next chapter in my life,” he told TMZ. “I’m the happiest I’ve ever been, and for since I could remember I was sad. Time to take care of my body and my family and friends, and spread as much love as we can every day.” TMZ also reported that the parents-to-be recently celebrated the happy news with “a private party for friends and family in Southern California.”

Post Malone hasn’t revealed when his baby is due or any other details about his little one on the way, but the “Rockstar” rapper has another exciting reason to celebrate. His fourth studio album, Twelve Carat Toothache, will debut on June 3. In addition to music, the rapper has also dipped his toes into the world of wine and created French rosé called Maison No. 9.

Located outside Salt Lake City these days, Post Malone will be raising his first child in his $3 million five-bedroom, seven-bathroom home The New York Post described as “apocalypse-proof.” Three years ago, Post Malone took a leap of faith and moved from Los Angeles to Utah, despite some disapproval from people in Hollywood, but he recently told Billboard his decision was a “big sigh of relief for the parental figures.”

He also spoke about being ready to “enjoy the simple things” in life. “I’ve made music for years and years, and down the line, I just want to relax and enjoy the simple things,” he told Billboard. “Be like a kid again. Have no responsibilities and everything is handled: your kids, your family, everybody is set and doesn’t need to worry, so you can just play games and play in the tall grass.”

A few months later and the “I Fall Apart” singer-songwriter is set to take on a new set of big responsibilities and will have a little buddy to play with in the tall grass soon enough.