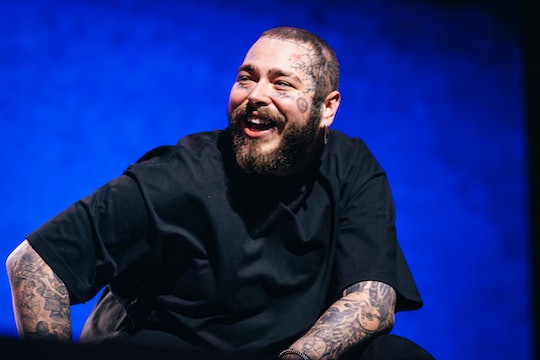 The rapper is now a dad of a baby girl, is getting married, and is going on tour this fall!

Congratulations to Post Malone, who announced on Monday that he is a dad! The notoriously private rapper recently welcomed his first child, a baby girl with his fiancée, and he’s already showering her with love and kisses.

The “One Right Now” singer revealed that his daughter has been born in an interview on Sirius XM’s The Howard Stern Show. In the interview, Malone said he “went and kissed my baby girl” on his way out the door.

Stern clarified, “Are you referring to your girlfriend, or do you have a baby?” per TMZ. Malone responded, “No, that’s my daughter.”

“That's been on the QT [quiet] though? We didn't know you had a daughter, right? You keep all that quiet,” Stern said. Malone then confirmed it, adding, “I want to let her make all her own decisions.” He didn’t reveal her name or her exact birth date.

Malone, whose real name is Austin Post, also confirmed that his girlfriend is now his fiancée, according to TMZ. The woman has been kept out of the public eye, and her identity remains a secret. She certainly needs time to adjust to motherhood and plan a wedding at the same time!

On May 3, the “Circles” rapper announced that he and his girlfriend were expecting their first baby. “I'm excited for this next chapter in my life, I'm the happiest I've ever been, and for since I could remember I was sad,” he told TMZ. “Time to take care of my body and my family and friends, and spread as much love as we can every day.”

He already has a strategy for being a dad: kindness. “People ask me like, ‘Oh what do you want to be as a dad?’” Malone told Jimmy Fallon on The Tonight Show on May 12. “Just kindness is the most important thing for me.” His respect for privacy and comfort with showing love and affection with his baby girl show how he’s already making good on this goal!

On June 1, Malone told Apple Music’s Zane Lowe on The Zane Lowe Show podcast that he wants to be a “DILF” — aka, “Dad I’d Like to F-ck.” “I'm so pumped,” he said. “I'm going to be a hot dad.” His dream has come true — there is nothing hotter than a dad who is absolutely in love with his family!

It’s no surprise that Malone seems comfortable with the idea of fatherhood. In the interview with The Zane Lowe Show, Malone explained he has always wanted to be a dad. “I was like four or five and I had this little baby I would carry around everywhere,” he said. “It was a baby doll. And I thought that was the coolest thing. I would take him around everywhere.”

Malone released Twelve Carat Toothache on June 3, and he announced he is going on tour this fall.

What an exciting chapter for Malone and his fiancée! This little girl is already so lucky, indeed.