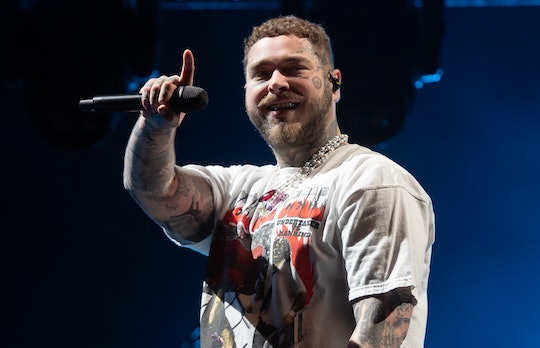 The rapper is already practicing swaddling and diaper changing, too.

Post Malone already knows what kind of dad he wants to be. Just weeks after revealing that he’s expecting his first child, the “Rockstar” rapper shared the most important quality he is looking forward to bringing to his future legacy as a father.

“People ask me like, ‘Oh, what do you want to be as a dad?’ Just kindness is the most important thing for me,” he shared during a recent appearance on The Tonight Show with Jimmy Fallon.

And when Fallon asked if he was practicing diapers, swaddling, and reading the baby books, Post Malone responded, “I’m trying.”

The 26-year-old, whose real name is Austin Richard Post, announced he was expecting a baby with his girlfriend on May 3. “I'm excited for this next chapter in my life, I'm the happiest I've ever been, and for since I could remember I was sad,” he said in a statement to TMZ at the time. “Time to take care of my body and my family and friends, and spread as much love as we can every day.”

The “Circles” rapper has not publicly revealed the identity of his girlfriend and mother of his child. But according to TMZ, the couple had a private celebration with family and friends. “She’s not someone who has spent any time in the spotlight,” a source told Entertainment Tonight, and added that “the two have been happy privately building their relationship — which will soon turn into a family.”

In addition to preparing for fatherhood, Post Malone has been busy on the Saturday Night Live scene. The Grammy nominee is the musical guest for this weekend’s upcoming episode of SNL hosted by Selena Gomez on May 14. The MC is also preparing to drop his very-much anticipated album, Twelve Carat Toothache, on June 3.

Post Malone has also shown throughout his career that kindness is something he tries to exude with his fans. Back in March, he went viral for surprising an autistic fan on his 21st birthday and thanked him for being a fan. “He was so incredibly kind and patient with our son who has autism,” Nicole Schumacher, the mother of Andrew Schumacher told FOX 11. “Andrew has a hard time speaking and Austin was so natural and sweet with him.”

Needless to say, that kindness quality that Post Malone wants to have as a father is already in motion!