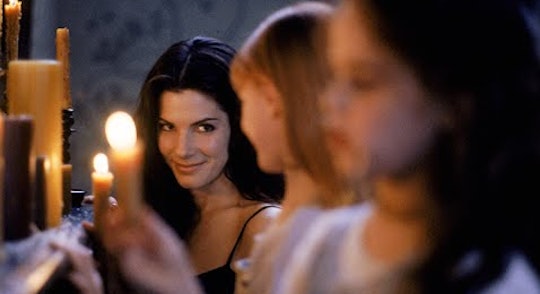 It might be a bit too scary for young kids.

No offense to all of the other very fine Halloween movies out there, but Practical Magic is in a league of its own. Witchy without being scary, fun and dark, and above all, romantic and yet mostly focused on the power of women supporting women. Plus the house is a dream. If you haven’t seen the 1998 Warner Bros. movie starring Sandra Bullock and Nicole Kidman as Sally and Gillian Owens, you are in for a treat. But if you’re hoping to watch it with kids... read on.

Practical Magic was based on the Alice Hoffman book of the same name from 1995. It follows the women of the Owens family, who have been labeled witches by the residents of their sleepy Massachussetts town for two centuries. Because they are. Sisters Sally and Gillian have been trying to escape their family reputation, which isn’t helped by their aunts Bridget and Frances (played so beautifully by Dianne Wiest and Stockard Channing) cooking up love potions constantly. Sally and Gillian believe their family is cursed when it comes to love for themselves, and it seems they may be right. Especially when Sally’s sweet husband dies in a truck accident and Gillian’s violent boyfriend Jimmy (Goran Visnjik) also dies. At their hands. More than once.

The Girls Find Their Power

‘Practical Magic’ is all about girl power.

The positive: the women of the Owens family, including Sally’s two daughters Antonia (Alexandra Atrip) and Kylie (Evan Rachel Wood), are a solid unit. They are in each other’s corner in a way that is not often seen in movies and moreover, the multi-generational element in that gorgeous household is an inspiration. The aunts help Sally raise her daughters after her husband dies. Sally and Gillian show up for each other no matter what. And despite the fact that romance is a central theme in the movie, it actually ends up taking a back seat to the relationships between the women. Which is a powerful thing to see for the younger generation.

There Are Plenty Of Sexy Vibes

The (potentially) negative in Practical Magic; there are a lot of sexual undertones, particularly between Gillian and Jimmy. And the sexual element is quite menacing. There’s also significant violence against a woman, which is definitely more problematic. Jimmy tries to strangle Gillian at one point, and it’s incredibly intense. Which has me thinking this movie and its mature theme is best for ages 13 and up.

Or you could try an old trick; watch ahead and skip through some of the more adult scenes. It is a really beautiful movie. I’ll mention that gorgeous house one last time.

Here’s Where You Can Watch

You can stream Practical Magic with a subscription to Amazon Prime or HBO Max, or rent it on YouTube, Google Play, or Apple TV. And if you really feel like getting into the spirit of things; whip up some margaritas and have some girlfriends over. It’s required fall viewing, after all.

More Like This
David Harbour Transforms Into A Santa No Kid Wants To See In 'Violent Night'
How Old Should Kids Be Before They Watch The 'Christmas Story' Sequel?
Kaavia James Stole The Show At Disney’s Strange World Premiere
All The Nights The Grinch Airs On TV In 2022